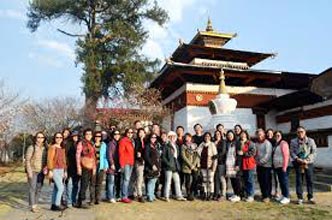 Haa is the chosen venue for the wedding ceremony in Bhutan. The valley is characterized with important landmarks such as the majestic Meri Phuensum Mountains or three brothers which are mystically believed to represent scared protecting deities of the valley, Manjushree, Vajrapani, and Avalokiteshvara. Apart from that, Haa valley retains the air of an unspoiled, primeval forest. The wooded hills of Haa valley provide an ideal location for hiking and leisure walks. Walking around the valley and hiking through pristine blue pine and rhododendrons forest is an enjoyable way to spend the day when visiting.