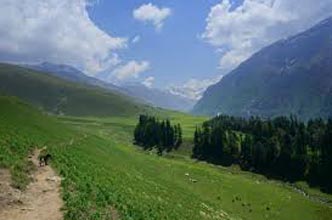 Trek Highlights Journey goes through dense forests, wide green meadows and gushing streams. Camp for the night at Dayara (one of the prettiest campsites in India). Camping for the night at Munirang, close to a gushing stream. You will see fascinating sceneries throughout the trip. Excursion to the beautiful Chandraharan lake is itself rewarding.

Traveling to different places gives you a new perspective to look forward to. You get a chance to explore the wonders and histories of this beautiful world. It is an unending exploration! Also, one can travel for overcoming the harsh realities of life. After all, traveling is a sort of fiction, isn’t it? Well, at Kinnaur Expedition, we believe that traveling is the purest form of activity that one can engage into. With a stringent mission of providing exceptional solutions and a firm dedication to reach at the top in the travel sector, we have established our travel agency that not just focuses on profit but strives to deliver utmost satisfaction to its clients. Read More...