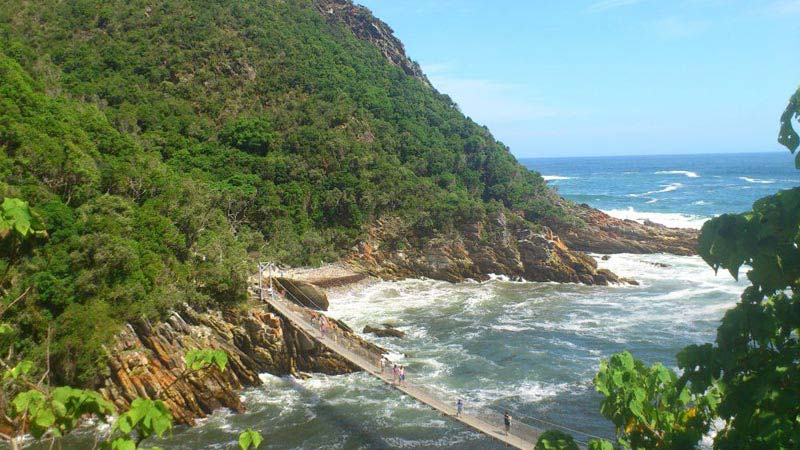 Fall in love with Cosmopolitan Cape Town the “Mother City”, cradled in the amphitheatre of the Table Mountain, Lion’s Head and Devil’s Peak mountain ranges. Explore Cape Point and Peninsula and the Cape Winelands. Experience the exotic natural beauty and wonders of the famous Garden Route in effortless exploring along the picturesque Southern Cape Coastline. The Garden Route, perennially green, has a mild Mediterranean Maritime climate and lies on a narrow belt between the Outeniqua and Tsitsikamma Mountains and the Southern Coast of Africa and includes a blend of charming towns, dramatic & scenic landscapes, tall trees, deep gorges, shimmering lakes, majestic mountain ranges, golden beaches and lush indigenous forests. In this Tour Option we return via the coastal village of Arniston and Cape Agulhas, southernmost tip of the African continent and the meeting place of the Indian and Atlantic Oceans (Seasonal add-on July to November : Whale Watching )

For 13 years, 34º South Tours has been crafting wonderful and memorable tours and safaris to discover the very best of South Africa.\r\n\r\nWe offer both private tours and small-group tour and our superb Tour Guides ensure you will experience our trademark brand of hospitality and an effortless and luxurious holiday experience with magical memories that will last a lifetime.\r\n\r\nThere are no crowded tour busses or large tour groups, rushing from one to the next point of interest to an itinerary cast in stone.\r\n\r\nRelax in a luxury air-conditioned tour vehicle while a knowledgeable and friendly South African tour guide escorts you safely to discover our local jewels.\r\n\r\nYou’ll be guided along the most interesting and scenic routes and in the most convenient order to save precious holiday time.\r\n\r\nHave a look at our Guest Comment page to find out what our guests think about our tours.\r\n\r\nMany guests have kindly offered that they can be contacted directly to verify their feedback as accurate. So feel free to contact us for client references. Read More...