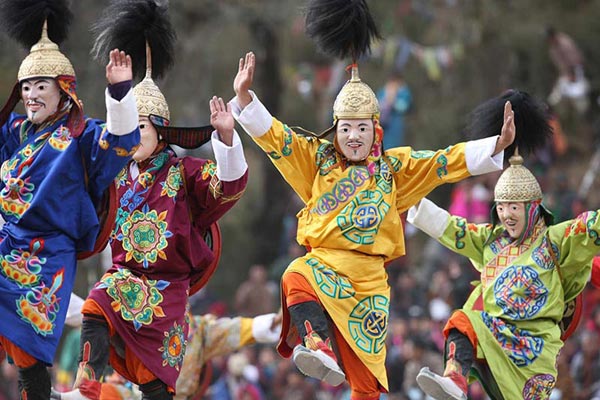 TOUR DESCRIPTION
The Dochula Druk Wangyal Festival was established in 2011 in commemoration of His Majesty the Fourth Druk Gyalpo and the Armed Forces’ victory over Indian insurgent forces residing in southern Bhutan in 2003.
Druk Wangyal Festival is an annual festival held on December 13th at the Druk Wangyal Lhakhang Festival Ground located at Dochula Pass around 22km from the capital city Thimphu. Dochula Pass is one of the most scenic locations in the entire kingdom, offering a stunning panoramic view of the Himalayan mountain range. Set amidst this breathtaking backdrop, the Dochula Druk Wangyal Tshechu is an experience unlike any other and truly exemplifies Bhutanese cultural traditions.
The Druk Wangyal Lhakhang was built over a period of four years (2004-2008) under the vision and patronage of Her Majesty the Queen Mother Ashi Dorji Wangmo. The Lhakhang honors the courageous service of the Fourth King, who personally led the troops against the insurgents, as well as the regular Armed Forces of the country.

TOUR HIGHLIGHT
The most solemn welcome ceremony at the airport with the offering of the scarf to the travelers
Blessing by touching the forehead, feel the charm of spiritual Buddhism
Join in with locals on a special occasion of celebration, blessings and socializing
Witness unique dances and rituals performed by the Royal Bhutan Army, the monks & the people
Visit most beautiful cultural attractions including medieval fortresses (Dzongs), markets and museums
Traverse beautiful landscapes from lush valleys to dense forests.
Get chance to taste traditional local delicate: Cheese: beef rice; Butter tea; Yogurt; Highland barleywine
A chance to try traditional costume of Bhutan and take part in the cultural show performed by our dancers
A visit to Punakha Dzong, one of the most beautiful fortresses built at the confluence of two Major rivers of Bhutan
Hike to Paro Taktshang, the most iconic landmark and religious site of Bhutan clings impossibly to a sheer cliff face 900 hundred meters above the Paro Valley.
A traditional hot stone bath to aid your body after a long day hike to Taktshang.Flight into Bhutan via Drukair (can be arranged with us)
Flight on other airline to catch Drukair Flight
Meals at 4-5 stars restaurants
Hotel stay outside of Bhutan
Expenditure of personal nature
Travel Insurance (can be arranged with us)
Tips for the guide and driver
Language guide
Alcoholic drink.