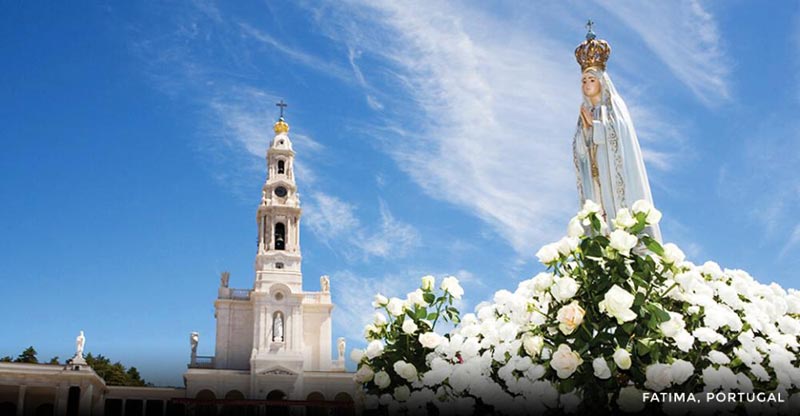 Celebrate the 160th Anniversary of the apparitions of Our Lady of Lourdes From the time you arrive, you are greeted with the life of St. Anthony of Padua (Patron Saint of Lost Things.) Then you are on your way to Fatima, home to the three shepherd children who witnessed the apparitions of the Blessed Virgin Mary - 100 years ago! Continue through the life of St. Teresa of Avila, and end in Lourdes. Whether you come for prayer at the Grotto or in the Basilica, or if you came to immerse yourself in the famous Healing Baths - Lourdes is the place for true miracles. About Fatima: The Shrine of Our Lady of Fatima is one of most famous Marian shrines in the world. Drawn by apparitions of the Virgin Mary to three local shepherd children in 1917. Four million people visit Fatima each year. The Blessed Virgin Mary appeared to shepherd children on the 13th day of six consecutive months in 1917, starting on May 13th until October 13th. The events at Fatima gained particular fame due to their elements of prophecy and eschatology, particularly with regard to possible world war and the conversion of Russia. About Spain: Saint Teresa and Saint Ingatius both hailed from Spain. Saint Teresa of Avila, also called Saint Teresa of Jesus, was a prominent Spanish mystic, Carmelite nun, and writer. Saint Ignatius of Loyola was a Spanish knight who became priest and found the Society of Jesus and became its first Superior General. About Lourdes: She came for you and for everyone of us! 6 million pilgrims come to Lourdes each year and 10,000 visit this site daily. At the foot of the Pyrenees mountains in southwestern France, nestled between the spectacular mountain river, Gave de Pau, is Lourdes, one of the most important pilgrimage sites in the World. Lourdes is the birthplace of St Bernadette to whom Our Lady appeared in 1858 near the Grotto of Massabielle. Our pilgrimage and tour of Lourdes includes visits to the sanctuary and the Basilica of St Pius X, the world's largest underground church. Drink from the spring that the Virgin directed Bernadette to locate at the base of the grotto, which has flowed uninterrupted since 1858. Wash yourself in the baths where hundreds of miraculous cures have taken place. Contemplate Christ's Passion as you pray the unique three-dimensional Stations of the Cross. Attend the blessing of the sick, and participate in nightly candlelight processions requested by Our Lady. Daily Mass, and Mass at the Grotto on Sunday will be followed by a video presentation telling the miraculous story of Lourdes. Visit Lourdes and experience a spiritual journey from which many have claimed healing and conversion.Lunches, Tips to your guide & driver