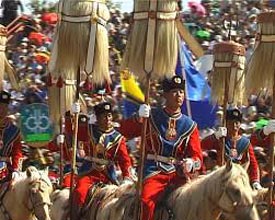 Galloping in the Gobi and Khangai Package

Various landscapes and habitats such as steppe, forest and Gobi Meet local nomadic families and learn about their lifestyle Sites such as Flaming cliffs, sand dune, ancient capital KharKhorin and Lake Ugii. Kharkhorin city, Orkhon Valley and Gobi are among the main attractions that one must see when they visit Mongolia. Traveling to these sites allows you to see the changing landscapes and habitats, from steppe to Gobi, or from forest to steppe. Aside from the landscapes, you will visit many sites famous of its historical and archeological importance.

Mongolia , a country known as the land of blue sky , is a landlocked country in the heart of eastern Asia sandwiched between Russia and China Read More...