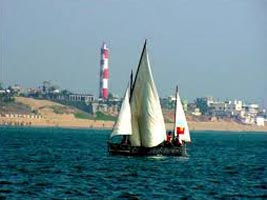 Konark|Puri
The first thing that comes to mind when we talk of Konark is its iconic Sun Temple, a 13th-century structure, believed to be built by Narasimhadeva I in 1250 CE. The grandeur of the temple is owing to the massive chariot with carved stone wheels, pillars, and walls. The temple is a UNESCO World Heritage Site and has also featured on the various list of Seven Wonders of India. But there' s more to town than that! Located in Odisha' s Puri district, Konark forms one of the three vertices of the state' s `Golden Triangle of Tourism'. This small town on the coast of the Bay of Bengal is famous for the excellent architectural craftsmanship of medieval days in various temples and monument. Beside pilgrimage, people visit the place to enjoy the serenity of its long and beautiful sea shore. There is an Archaeological Museum that houses sculptures and other pieces that have over the years tipps4.35% Government service tax extra.
Any Kind of Personal Expenses or Optional Tours / Extra Meals Ordered.
Monument & Museum Entrance Fees for the sights mentioned in the Itinerary.
Anything not specifically mentioned under the head "Prices included".
Tips, Insurance, Laundry, Phone Calls.
The Services of Vehicle is not included on leisure days & after finishing the sightseeing tour as per the Itinerary.
Any Kind of Drinks (Alcoholic, Mineral, Aerated).
Camera fee, Soft or Hard drinks, Starters.
Medical & Travel insurance

Sai Darshan is one of the prominent tour and travel companies having its office in Odisha, India. We are counted amidst the named and skilled companies that are engaged in designing striking India tours packages. Adding to this, we are also indulged in providing travel related services such as Car & Coach Rental, Railway Ticketing and Hotel Booking Services. Not only for the sake of saying, but in literal sense we have always catered to all the requirements and demands of the clients. Over the years, we have become the foremost choice of the clients as we offer qualitative services and those too at the services at cost-effective charges. \r\n\r\n Sai Darshan was incepted in the year 2006 under the strict headship of Mr. Prakash Chandra Dalai. He is endowed with in-depth knowledge having years of experience in this domain. Also, we are supported by a team of skilled and proficient workers who work with utmost dedication. This is how we have successfully catered to many clients whilst enhancing upon our own standards each and every time. Our main motive is to offer hassle free services to the customers and make sure that their trip is enjoyable and safe at the same time. Read More...