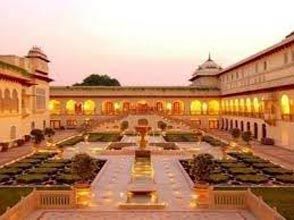 The royal state of Rajasthan, known as the ‘Land of Kings’, is a place where one can travel back in time. The forts and palaces have tales of romance, heroism and chivalry to tell. One of the most sought-after states of India, Rajasthan is a delight for shoppers, history buffs, a wanderer and cultural enthusiasts. The expansive Thar Desert, the Aravallis- one of the world’s oldest mountains, puppet shows, magnificent palaces and forts, scrumptious local dishes, wildlife sanctuaries, camel safari rides and, fairs and festivals are major crowd pullers. Also referred to as the ‘living museum of the Indian sub-continent’, it can best be explored on a motorbike. This is a well-planned Motorcycle tour of Rajasthan so that you can explore the dusty roads and bustling streets in a unique way, while riding your Royal Enfield, passing by the desert, the cities and the rural areas. During Rajasthan Motorcycle trip, you get a chance to get a sneak-peak into the unseen parts of the vibrant Rajasthan. The ride is going to offer you the best of experiences that you would cherish for a lifetime.

A thriving name in the travel industry, Dream Destination – Travel Planner is involved in providing all sorts of tour & travel services and solutions under one roof. Ms. Dimple Shah serves the company as its CEO and she has been leading the company with her impeccable mentorship. Our company base is located in Mumbai (Maharashtra, India) and we cater to multifarious needs of inbound, outbound and domestic travelers. Whether you are a bird of passage or prefer to travel occasionally, we offer ample options for both. When you choose to travel with us, from the time of your departure to the time you reach your homeland, we take care of everything. Read More...