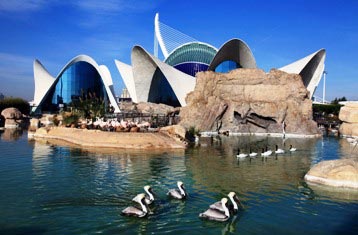 Spain with the historical corridors of Ronda, Cordoba, Seville and many other towns and cities, Spain is a rejuvenating land of grand festivities and outdoor activities.Spanish culture is widely known for Flamenco music and dance, bullfights, fantastic beaches and lots of sunshine. Spain has an extraordinary artistic heritage. The dominant figures of the Golden Age were the Toledo-based artists El Greco and Diego Velázquez. Francisco de Goya emerged in the 18th century as Spain's most prolific painter and he produced some wonderfully unflattering portraits of royalty. Spain attractions La Concha - It is a fantastic urban beach which has all the necessary services and infrastructures. la Concha beach in Spain is the heart of the city of San Sebastian. Running of the Bulls - Pamplona is a city in Navarra, famous for its Fermin festival held each year from July 6th - 14th. At the heart of the festival is El Encierro, the Running of the Bulls, an activity that involves running in front of a dozen bulls that have been let loose, on a course of the town's streets. Royal Palace - The Palacio Real or Royal palace is the largest and certainly one of the most impressive palaces in Europe. It has more than 2000 luxuriously decorated rooms, 50 of which can be visited. Sagrada Familia - The Sagrada Familia, Antoni Gaudi's unfinished masterpiece, is one of Barcelona's most popular tourist attractions. El Escorial - The Escorial is a vast building complex located in San Lorenzo de El Escorial, near Madrid, in central Spain. The building is the most important architectural monument of the Spanish Renaissance. El Escorial start in 1563 and ended in 1584.Any meals other than those mentioned above Any train fare or airfare Other transportation that is not mentioned in the itinerary Entrance fees to the monuments, amusement parks & boating charges Any other charges like portage at the airports and hotels, tips, insurance, mineral water, wine, telephone charges, and all items of personal nature Any other services apart from those mentioned in inclusions Any other expenses caused by factors beyond our control like rail and flight delays, roadblocks, vehicle mal-functions, political disturbances etc GST applicable on total package cost