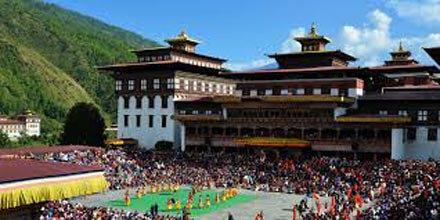 TOUR DESCRIPTION The day-long festival dates back to the 17th century. It was first introduced by Kuenga Gyeltshen in 1710, which was recognized as the reincarnation of Jampel Dorji, son of Zhabdrung Ngawang Namgyel. The Dromchoe is celebrated 3 days prior to the Thimphu Tshechu. The Dromchoe showcases the sacred dances dedicated to the chief protective deity of Bhutan, Palden Lhamo. Legend has it, that the deity Palden Lhamo appeared before Kuenga Gyeltshen and performed the dances while he was in meditation. Based on these dances, Kuenga Gyeltshen initiated the Dromchoe. TOUR HIGHLIGHT The most solemn ceremony of welcoming anyone by offering the scarf Witness sacred dances and rituals performed by monks and laymen in elaborate, colorful costumes A chance to try traditional costume of Bhutan and join in with locals in a special occasion of celebration, blessings and socializing Discover some of the most sacred Buddhist monasteries and many other cultural attractions including medieval fortresses (Dzongs), markets and museums Hike up to the famous Taktsang Monastery, perched on a cliff 900m above the valley floor Marvel at the elaborate and ancient wall paintings and carvings in Dzongs and temples Traverse beautiful landscapes from lush valleys to dense forests Get chance to taste traditional local delicate: Cheese; Red rice; Butter tea; Yogurt; Highland barleywine A Traditional hot stone bath to heal your body after a hike to Taktshang Happiness campfire, where our team will show cast Bhutanese traditional songs, play, and dances. The travelers will also take part in the dance.Flight into Bhutan via Drukair (can be arranged with us) Flight on other airlines to catch Drukair Flight Meals at 4-5 stars restaurants Hotel stays outside of Bhutan Expenditure of personal nature Travel Insurance (can be arranged with us) Tips for the guide and driver Language guide Alcoholic drink.

Please check with your Travel Agent in the festival Dates