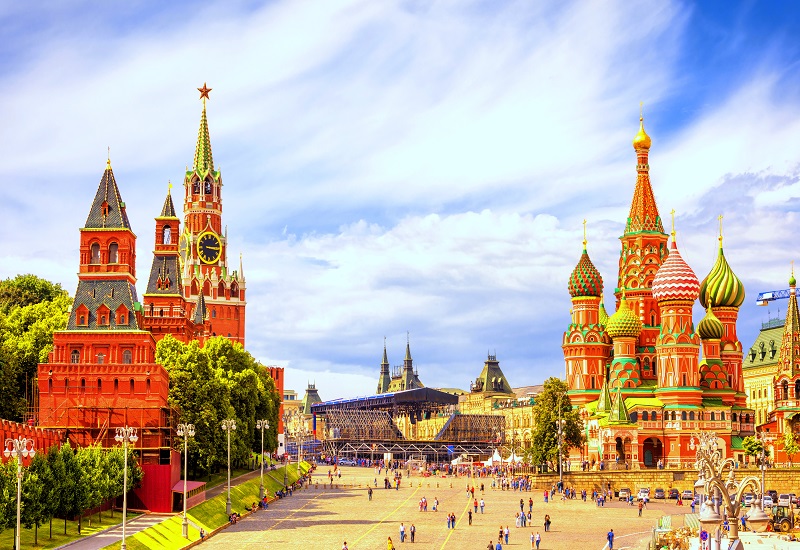 Offered by : Start Your Journey 5/5

Russia is the largest country and one of the most popular travel destinations in the world. You can explore the length and breadth of your imagination if you happen to travel Russia with our Russia Packages. One who has been to Russia can tell you his little story about the beauty of the country.
Moscow

Moscow boasts of incredible history which one can see in its culture and architecture. With our Russia Holiday Packages you get a chance to visit astonishing sights like Red Square, Saint Basil Cathedral, and Bolshoi Theatre, Novodevichy convent, the Kremlin and Lenin's tomb in Moscow.

All the elements that make an unforgettable travel experience, one can come across in St. Petersburg. The popularly known as 'Venice of the north', St. Petersburg is overwhelmed by splendid palaces, extraordinary historical

monuments, tree lined avenues and beautiful bridges. From the mysterious twilight of the White Nights to world-beating opera and ballet productions on magical winter evenings, St. Petersburg charms and entices every one in every season.

Payment Terms & Methods :
Depending upon the tour you have booked, you would be getting a Seat in coach or a private transfer. You are requested to clarify all your queries pertaining to transfer with your travel advisor well in advance before the tour starts. Seat in coach transfers are on fixed timings only and may differ from country to country. Please check with your travel advisor for further details in this regard. In case you have not booked any transfers with us, we recommend that you kindly make appropriate arrangements personally to have a comfortable journey.

While our travel advisors will advise you of all possible information including travel tips about your destination, please do request for any additional information that you need on issues like currency, weather, sightseeing etc and we would be glad to help you with more details.

All hotels offered are subject to current availability. Should the same not be available at the time of your final booking, we will arrange to provide a similar category hotel.

Cancellation & Refund Policy :
Package is 100 % Non- Refundable 15 Days Prior to the Departure

50% Payment is required for Confirming the Package , else Remaining Payment to be shared before 15 Days Prior to Travel Date.


About Start Your Journey

Start Your Journey is counted amongst the leading names in the tour and travel sector of Delhi. We have become instrumental in catering to various travel requirements of the travelers in a short time. We are specialized in providing a wide variety of tour packages for the clients. We provide the services for flight booking, car & coach rental, cruise booking, event management, bus ticketing and railway ticket booking. In addition to this, we also provide tour operators services, hotel booking services and passport & visa services as well. Read More...

More Packages by Start Your Journey