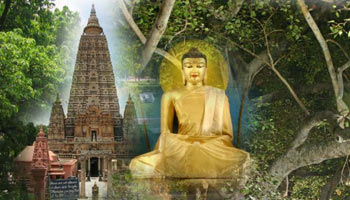 BODHGAYA: As the place of the Buddhas Enlightenment, Bodhgaya is the spiritual home of Buhddhists. It attracts tens of thousands of believers from all over the world. Bodhgaya situated near the river Niranjana, is one of the holiest Buddhist pilgrimage centres since it was here that Buddha attained enlightenment under the Bodhi tree.The population of this town is 22,000 and is situated at an altitude of 113 m. Maximum temperature in summer rises to 45-47 degree Celsius and minimum is 27 degree, while in winter maximum is 28 degree and minimum is 4 degree. It receives an annual rainfall of 1,860 mm. Most countries with vast Buddhist population have a temple or monastery here. The 25 m Great Buddha Statue in the Japanese Kamakura style was unveiled by his holiness Dalai Lama in 1989.

Bodhgaya History
Prince Siddhartha Gautama of the Saakya tribe came here in 528 BC, in search of the truth. He had renounced life as a prince, broken family ties, practised severe penance and trained under several teachers for six years before he came to Bodhgaya (then called Uruvela). It was while meditating under a peepul tree here that he gained spiritual enlightenment or Bodh.

Much of the towns history is known from inscriptions on the stone railing of the Mahabodhi Temple and the accounts of travellers and pilgrims. Excavations carried out since the 19th century have revealed interesting examples of art and architecture. Of particular importance is a model of the original temple that was found during excavation.

During the 4th century, Sri Lankan Buddhists gained control of the Mahabodhi temple as a result of the efforts of the Sri Lankan King Meghavanna. The king later built a monastery in Bodhgaya. During the Gupta period (4th to 6th century) the temple and its surrounding area went through many changes. Quite a few small shrines were constructed, but only the remains of their foundations can be seen today.

One of the most prosperous periods for the temple was during the reign of the Pala kings of Bengal (8th to 12th century). The temple received lavish donations and gifts from the Pala rulers and other Buddhists of Bengal. During this time it was also an important centre for learning. The famous Bengali scholar Atista, who is credited with playing an important role in the resurgence of Buddhism in Tibet, was ordained here.

With the decline of Buddhism in India in the 12th and 13th centuries, Bodhgaya became less frequented and almost all its temples and shrines fell to ruin. Four centuries later, attempts to restore the art and architecture, and revive the place as a centre for pilgrimage began once again. Today, Bodhgaya is the most important Buddhist pilgrimage centre in the world. It is a fairly quiet, small town that explodes into a colourful, tented Buddhist pilgrimage centre every winter.