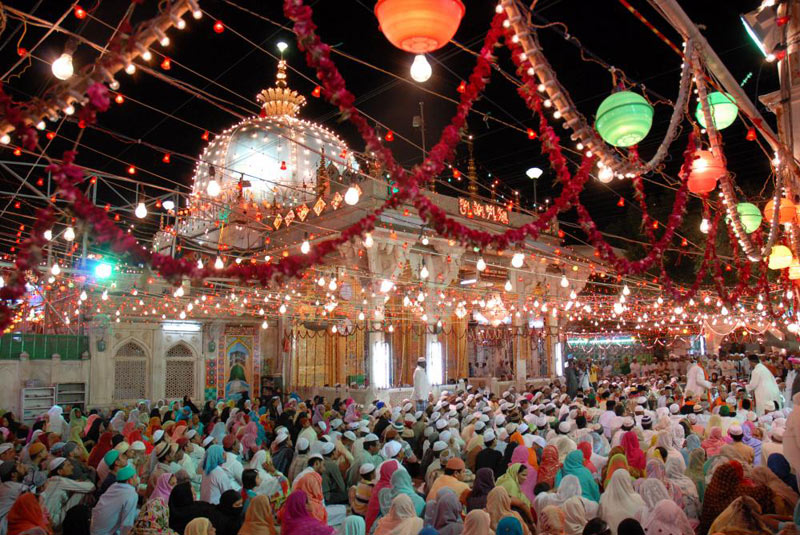 Ajmer with population of 400,000 is an important sacred city of Rajasthan south of Jaipur nestles in a picturesque valley of Aravalli Ranges . It was established by Ajaipal Chauhan during the 7th century. It was then called Ajaimeru meaning invincible hills. The city is world famous because of Dargh Sharif Ajmer the burial place of Sufi saint Khwaja Muin-ud-din Chishti. The birth place of the saint is Sanjar in Persia in the year 1142. It is believed he entered India along with the army of Muhammad Ghur dating back to 1191. His end came in 1236 after living in seclusion for six days remembering the Almighty. He is till today remembered as a saint and protector of the poor. People of all nationality from all over the world visit Dargh Sharif Ajmer located in the centre of the old city. The credit of constructing the Mazar along with dome over the existing structure at Dargh Sharif Ajmer goes to the Sultan of Mandu Ghyasuddin. Dargh Sharif Ajmer is a major pilgrimage centre for Muslims at the time of fast of Ramadan.

At Dargh Sharif Ajmer help is extended by khadims to devotees, qawwals sing in honor of the saint, water is offered by bhistis. Shoes have to be removed at the gateway. On one side is a mosque made by Emperor Akbar. A little further within the premises is another mosque constructed by Shah Jahan with 11 arches and inscriptions in Persian. Second court houses the tomb of saint at Dargh Sharif Ajmer within silver platform. In the courtyard are two gigantic cauldrons meant for cooking food for distribution among the poor and the devotees. Dargh Sharif Ajmer is well connected to the entire country through air, train and road.Any meals other than those specified
Expenses of personal nature such as tips, telephone calls, laundry, liquor etc
Entrance fees during sightseeing
Any other item not specified