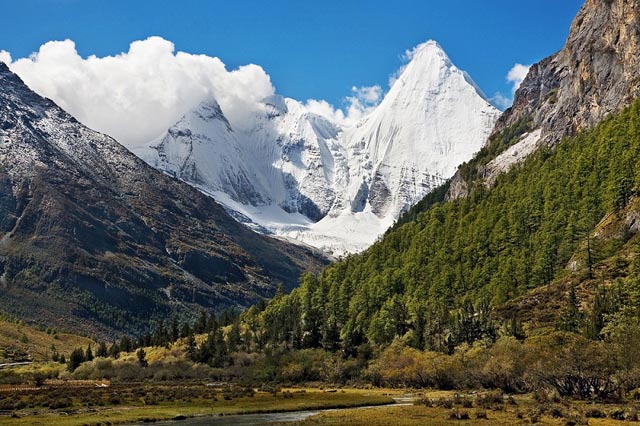 In 2016, join expert photographer and Tibetan guide Philip He on an adventure designed to reveal mysterious and most beautiful part of China---Grand Shangri-La, from the holy mountain surrounded by grassland, glaciers, hot springs to sacred temples, folk house and Chinese minorities. This photography expedition offers a total immersion into the world of wild nature and Tibetan culture. You will follow the local guides who know the best location and best time of shooting in the nature and discover the life of Chinese minorities living in the snow mountains. You will be treated with the divine beauty of nature which could not only satisfy your demand of photography but make you subjugated by the magic of nature.

1.Mount Gongga
Located at the eastern edge of the Tibetan Plateau, Mount Gongga is the highest mountain in Sichuan, with the highest peak of 7,556 meters (about 24,790 feet) above sea level, enjoying the fame as ‘King of the Mountains in Sichuan Province’.As one of the places where maritime glaciers originate, Mount Gongga is best well-known for its 159 glaciers which cover more than 390 square kilometers (about 151 square miles). The largest is Hailuogou Glacier No.1 at 6 kilometers (about 4 miles) long and 0.4 to 0.7 kilometers (0.25 to 0.43 miles) wide, which is believed to have formed 1,600 years ago. Glaciers in Hailuogou are typical modern marine glaciers, which are rarely found either in low-latitude places or at low altitude. The ice-clad waterfall in Mount Gongga is active all year round, and you will not feel cold walking on the glaciers in summer or autumn.

In the scenic area, there are more than ten plateau lakes some of which are at the foot of glaciers and some are surrounded by forests and all keep their original natural features. Covered by thick forest, it supports 4,880 species of plants and over 400 species of plateau and forest animals, most of which are under special state protection. It is also a wonderful place for wildlife safari.

Except for the glaciers and wildlife, in the east slope of Gongga, there is another phenomenal wonder called “Red Stone Stream” in the Swallow Valley which stretches two hundred meters flowing down from the snow cap. The red color of the stones is dyed by a kind of alga called “Trentepohlia”. The climate is very humid in the area and there is much manganese in the earth which provide a wonderful growing environment for the alga. According to the local, when it rains in the mountain, the stream will be as red as blood.

2.Xinduqiao
Due to the wonderful natural lights and stunning landscape, Xinduqiao is known as the paradise of photographer. It is a picturesque small Tibetan town and famous for its plateau pasture scenery, with vivid green grassland, streams, mountains, and Tibetan counting houses surrounding it.

The best time to do photography during the year is autumn. The first wisp of the dawn's sunshine, or the twilight's last gleam, accompanied with some slow-flying clouds will undoubtedly burnish all the amazing photos you take here. There are no obvious bounds among different attractions which made a “gallery for photographers” lasting 10 kilometers.

Besides the picturesque scenery, the folk houses also make good photos. The small-sized blockhouse, home to local Tibetans, is the most ethnic and typical architecture in Xinduqiao. Usually a blockhouse is built into 2 or 3 floors, in a simple and unsophisticated style. In our photography tour, we can also visit some local family with our local guides to discover the inner design and talk to the local.

Which is the highest city on the earth? I am afraid Lhasa, on the roof of the world---the Tibet plateau, is not the right answer. At an elevation of 4000 meters, Litang is about the highest city in the world, while Lhasa is only 3700m. Litang County is in the high mountains of the Tibetan Plateau with only about 70,000 residents. it is a great place to find great scenery and exotic traditions. Though the elevation is very high, the glassy area is suitable long-distance horse races and tent camping. Every August, there will hold a Litang Horse Racing Festival which was a part of the functions of the Litang monastery---the oldest and largest monastery of the Gelukpa sect (yellow sect) of Tibetan Buddhists in Kham Area. Destroyed in 1956 by the red guards, most buildings of the Litang Monastery have only recently been rebuilt. The festival was canceled in 2008 and 2009. In 2010, a small festival was organized, but it wasn’t widely announced. Situated high on a grassy plateau, Litang has the feel of a rough and tumble 'Wild West' town. It would be very fun to watch the horse racing and camp in the warm weather on the grassland. It will be a original experience to shoot this less organized and less commercialized horse racing event in this kind of stunning nature beauty.

A good photography tour in western China can never exclude Yunnan Province. Meili Snow Mountain, also known as Prince Snow Mountain, is located 10 kilometers (6.2 miles) northeast of Deqin County of Yunnan Province. It sits on the border of Yunnan Province and Tibet, where the three famous rivers, namely the Jinsha, Mekong (Nu) and Salwen (Lancang) flow.
Known for the grandest view in Yunnan Province, Meili Snow Mountain boasts numerous snow-clad ridges and peaks, thirteen of which exceed 6,000 meters (19.685 feet) above the sea level. The most splendid view is of the Kawagebo Peak, the highest in Yunnan Province rising about 6,740 meters (22,112.86 feet). It is still a 'virgin peak' for no one has ever reached the top. Visitors are treated to spectacular view from all vantage points. The continuous mountain ridges feature snowy peaks and the sun throws golden lights on the low-floating clouds which form various extraordinary shapes, affording yet another splendid view! But mostly, the mountain presents itself as mystery when dense fog and clouds made it a gleaming sight to see and you could hardly resist the temptation to unveil it. You can have a panoramical view of the thirteen towering peaks from the Feilai Temple which is in the west of Deqin County.

Owing to its high altitude, the mountain owns several climatic zones with a diversity of plants, vast expanse of grassland and rich fungi species that are vertically distributed. The types of vegetation here range from the Torrid Zone to Frigid Zone vertically. From the altitude of 2,000 meters (6562 feet) to 4,000 (13123 feet) meters, forests flourish with varieties of spruce. The depth of the forest is an exotic world of rare birds and animals. The meadows surrounding the forests are embellished by countless flowers which add more vitality and charm. Moreover, Meili Snow Mountain is one of the most sacred mountains of Tibetan Buddhism. 'Kang Karpo Peak' means the God of Snow Mountain in Tibetan, and is a holy land for worshiping. Pilgrims from Tibet, Qinghai Province, Sichuan Province and Gansu Province come here at the beginning of each winter to worship. Thousands of devout pilgrims worship together and encircle the holy mountain, adding even more mystery and loftiness to it. Though the accessibility to Meili is not good, it is truly wonderland for shooting snow-mountain, various forest flora and fauna and Tibetan culture.

5. Lijiang
Lijiang is considered a fairyland blessed with fresh air, clear streams, breathtaking snowy mountains and an undisturbed landscape inhabited by friendly people. This is the main region inhabited by the Naxi People, one of China's 55 minority ethnic groups. The Old Town District has the well preserved Lijiang Old Town, listed a World Cultural Heritages site by UNESCO in 1997. The Old Town was once the center of the city and continues to maintain the original flavor of the local lifestyle, the typical local architecture and the profound cultural heritage of the region.

Graced by well-preserved ancient buildings, Lijiang is so enchanting due to the 1,000-year small bridges, swift canals, cobbled streets and grey tiled roofs as well as the ancient legacy of the Naxi ethnic group. While trying to reserve the authenticity, the town is turning very touristy with hundred thousand of tourists visiting every year after announced as the UNESCO site. But it can never veil the charm of Lijiang to photographers who are interested in the architecture and minority culture shooting.