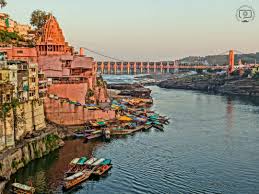 Dotted with heaps of sacrosanct temples and cultural insignias, the getaways from Indore serve as a perfect tour option for all the tourists who want to drench themselves in spirituality and peace of mind. Tour to these temples guarantees the tourists with an excursion that rotates around grand palaces and holy shrines. These popular attractions are renowned for their cultural significance and exquisiteness. This 03 Nights and 04 Days trip to spiritual Indore getaways takes the tourists to a comprehensive and pleasant tour to consecrated destinations like Ujjain and Omkareshwar. The major attractions of the trip are visiting attraction in Indore such as Lal Bagh Palace, Kanch Mandir and Gomatgiri, visiting historical places, sightseeing in Ujjain and exploring temples in Omkareshwar. The tour is ideal for spirituality lovers in quest to attain serenity of mind.

Ghumo Jahan Tours & Travels is a promising name in the Indian Tourism Space. This company stepped into the tourism market of Bharuch (Gujarat) in 2020. Mr. Imran Daud Bhola is the founder of the company who established this firm after conceiving expertise in the tourism sector. His prime aim behind establishing the company was to provide optimal services to travelers and holidaymakers at the lowest possible market rates. We render a wide array of services including car rental, hotel booking, flight booking, and railway ticketing. Besides, you can also make the best use of our travel insurance consultancy & passport/visa acquisition services. Read More...