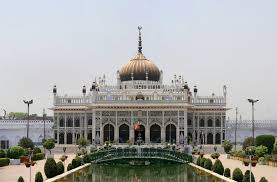 Lucknow, a large city in northern India, is the capital of the state of Uttar Pradesh. Toward its center is Rumi Darwaza, a Mughal gateway. Nearby, the 18th-century Bara Imambara shrine has a huge arched hall. Upstairs, Bhool Bhulaiya is a maze of narrow tunnels with city views from its upper balconies. Close by, the grand Victorian Husainabad Clock Tower was built as a victory column in 1881.

Established in the year 2018, Strollout Services India Private Limited is a promising name in the tourism industry of New Delhi. We are a domestic & international travel management company owned and managed by Hritik Singh. He laid the foundation of the company with the aim of simplifying multiple procedures related to the tourism space of New Delhi. Under his leadership, we are serving clients by offering car rental service, hotel booking service, and cruise booking service. Moreover, we also commenced our event planning services after establishing our roots in the industry. Read More...