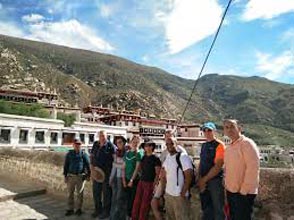 Details The Friendship Hwy between Lhasa and Kathmandu in Nepal is the main travelers’ route through Tibet and allows a number of excellent detours. It's an ideal route in that it takes in most of Tibet's main sights, offers superb scenery and features a spectacular roller-coaster ride down from high La Lung-la into the Kathmandu valley. With this small group, you can head straight from Lhasa to the coiling scorpion-lake of Yamdrok and the glacier-draped Karo-la pass to Gyantse. Then a 90-minutes drive away is Shigatse with its impressive Tashilumpu Monastery. The most popular excursion from the road is to Rongbuk Monastery and Everest Base Camp. A new paved road has cut down driving time to just a few hours. This classic overland route of around 1300km can be done in just 7 days on this well organized trip, and it takes in central Tibet’s most important monasteries, plus views of the world’s highest peak. Minimum number of people for the trip : 2 person