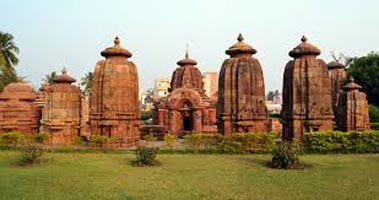 in the wild and remote mountainous country located towards the south-western tip of the Malkanigiri highlands lives a unique tribal community called- “Bonda”. The tribesmen identify themselves as “Remo” (man). Bonda speak a language of their own that belongs to the Austro- Asiatic (South Mundari) language group. Bonda men are brave and bold. They derive their identity from their arms, such as bow, arrows, long knife which they always carry and sago palm-wine which is their most favorite drink. The Bonda women with their clean-shaven head decorated with head bands of Palmyra strips and plaited fillets of caryota fibber. Mass of colorured beads and shell strings, brass neck rings and necklaces hanging down even below the navel and the brass bangles covering the whole of the lower arms are the typical ornamentation of the Bonda Women. A short and narrow strip of striped loin-cloth woven at home by a double-bar tensioned loom covering only the private parts comprises the woman’s wear.

In the remote mountainous wilderness of the Eastern Ghats region of South Orissa lives a fascinating Kuvi-speaking tribe called, the Dongria Kandha. They inhabit the lofty Niyamgiri hill ranges in the district of Rayagada. They stand apart fromothers for their famous Meria festival, expertise in horticulture and colourful dress, adornments and life style. For being the denizens of hills, forests and highlands (dongar), their neighbours name them Dongria. Dongria men and women are quite fashionable in their personal adornments, that makes them attractive and distinguish them from others. Dongria men put on a long and narrow piece of loin cloth and women use two pieces of cloth, each 3-4 ft. In length. Both men and women grow long hair. A wooden comb (kokuya) is fixed at the hair knot of men and women which adorns the hair-lock and keeps the hair tight. A tiny knife (pipli) with colourful thread balls at its metal handle, adorns the hair lock of women. Men and women put on aluminum neck rings, beads & coin necklaces (kekodika), finger rings. In addition to that women wear bangles, anklets, toe rings. Both men and women wear earrings and nose-rings.

In the Kondha dialect the term “Kuti” means hole. There is legendry tradition among the Kutia explaining that they had been originated form a hole on the earth. According to the legend their supreme God, Sapangada, the Creator, appeared in a place near Guma Village well as some other Gods and Goddesses to look after the worldly beings. The human beings who came out from the holes later became tribals ( Kandhas), Harijans ( Panos) and Oriyas according to their deeds, habits and occupations. Since they had originated from the holes or Kuti they are called “ Kutias” . Now the Holy place of appearance of Spangada is covered under forest. A hereditary Kutia priest called Buduka worships the God annually in a big communal festival named Sapangada Jatra held during January- February.


Some people say that Kutias are fond of tattooing their bodies. Tattooing in Oriya Language is called Chitta Kutta and hence, comes the term “ Kutia” , the people with tattoo marks or Chitta kuta.

one of the most colorful tribal community live in the high hill core jungle of Rayagada Dist of Southern orissa ( 1200 mt of sea level , but all weather metal road is there) . they are distinguish with their physical appearance , special costume, ornament and house style.  They are very friendly and like to live with nature.

The saoras are one of the most ancient tribes of India. Have a racial affinity with the Proto- Australoid stock, their dialect called Sora, comes under the Austro-Asiatic family of Munda group of languages. Lanjia Saora constitutes one of the primitive sections of the Saora tribe. They are so called by their neighbours strip of male loin cloth is worn in such a fashion that both the red embroidered ends hang down in front and back like a tail (Lanja). Their women greatly enlarge their enlarge their ear lobes to wear rounded wooden pegs and have a characteristic tattoo mark down the middle of the forehead. Install the village deities represented by wooden posts at the entrance of the village. Have male and female shamans to serve their magico-religious needs. Famous for their attractive wall paintings,” IDITIAL”. Observe Guar, the secondary burial ritual to commemorate the dead by sacrificing buffaloes and by erecting menhirs.


Whatever you want out of your trip we can tailor make an itinerary for you!!!!!

We Planing and Organise the Special Interest Package Tailor Made Tribal Tour & Wildlife Adventure Tour for Inbound and Domestic Tourist (guest) with Best Guide and Driver with Best Price. Due to Personalized Service We Want Guest But Not More Then Max. 12 Pax. per Group. We Respect also Local , So We Priority to the Responsible Tour( Sustainable Tour). our Moto is Lets Grow and also Grow to other Through Tourism. Read More...