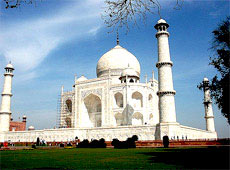 Excursion India invites you to be art of a traveling tradition that dates back 5000 years. Follow in the footsteps of these historic wayfarers for a kaleidoscopic look at the timeless cultural fabric that binds these fascinating people together.
We have designed a special Program based on "UNESCO World Heritage Sites" in India.
India is the proud owner of umpteen world heritage sites that draws tourists from all across the globe to India. These sites form a part of the cultural and natural heritage and are considered to be of great universal value. There are certain monuments in India that have been selected by UNESCO to encourage protection and preservation of cultural sites considered to be of outstanding value to humanity. A visit to such sites makes us updated with our glorious history and grants us the opportunity to listen to the grand narration of the spectacular monuments.
The cultural heritage of India is known the world over in the form of its historical monuments, forts, palaces and castles. Keeping in mind this rich historical legacy; UNESCO enlisted Indian amongst the countries having the places, which were given the status of World Heritage Sites depending on their historical importance and contribution to the country's royal and memorable past.

We are Dealing in Tour Operators Services Read More...