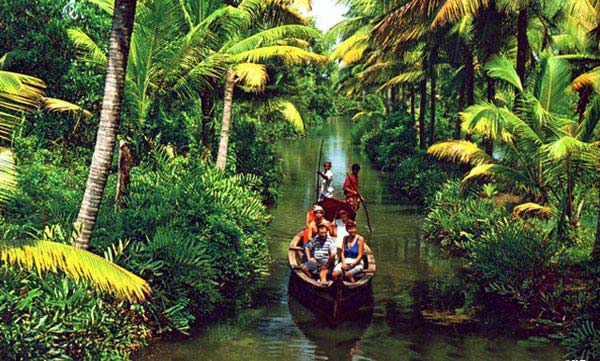 Kerala the land of kera or coconut is a never ending array of coconut palms. after Independence, Travancore and Cochin joined the Republic of India and Travancore - Cochin was given the status of a state. Production of pepper and natural rubber contributes to a significant portion of the total national output. Kerala attractions Kerala Backwaters - One of the most tranquil and relaxing things you can do in Kerala is take a trip in a houseboat along the palm - fringed Kerala canals, known as the backwaters. Freshly cooked Indian food and chilled beer on board the boat make the experience even more enjoyable. Munnar - Known as kashmir of South India & its situated in Kerala. Munnar is located at an altitude of 1600 feet above sea level. Munnar is one of the most beautiful hill stations in Kerala. Fort Kochi - Known as the "Gateway to Kerala", Kochi is an enchanting city that's had an eclectic influence. Arabs, British, Dutch, Chinese, and Portuguese have all left mark there. The architecture and historical sites in Fort Kochi attract most of the visitors to the area. Varkala - The setting of this Varkala beach is striking enough to take your breath away, with a long winding stretch of cliff and views that extend over the Arabian Sea. A paved footpath runs along the length of the cliff, bordered by coconut palms, quaint shops, beach shacks, hotels, and guest houses. Kovalam Beach - Visit the Kovalam beach that has been divided in to three parts - Lighthouse Beach, Hawah Beach and Samudra Beach. Also have a look at the Vizhinjam Lighthouse and mosque besides some other attractions located around the beach.Any meals other than those mentioned above Any train fare or airfare Other transportation that is not mentioned in the itinerary Entrance fees to the monuments, amusement parks & boating charges Any other charges like portage at the airports and hotels, tips, insurance, mineral water, wine, telephone charges, and all items of personal nature Any other services apart from those mentioned in inclusions Any other expenses caused by factors beyond our control like rail and flight delays, roadblocks, vehicle mal-functions, political disturbances etc GST applicable on total package cost