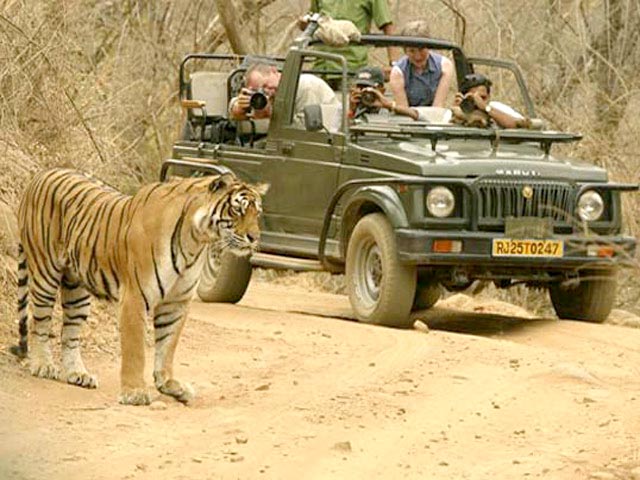 Bandhavgarh National Park is one of the popular national parks in India located in the Umaria district of Madhya Pradesh. The park derives its name from the most prominent hillock of the area, which is said to be given by Hindu Lord Rama to his brother Lakshmana to keep a watch on SriLanka (British Name : Ceylon or Ancient Name : Sinhdweep). Hence the name Bandhavgarh (Sanskrit: Brother's Fort). Bandhavgarh was declared a national park in 1968 with an area of 105 km². The buffer is spread over the forest divisions of Umaria and Katni and totals 437 km². Project Tiger was constituted in 1972 and then the Wildlife Protection Act 1972 came into force. It was realized that protection of just the 105 km² of prime Bandhavgarh habitat was not enough, so in 1982, three more ranges, namely Khitauli, Magdhi and Kallawah were added to Tala range. This park has a large biodiversity. The density of the tiger population at Bandhavgarh is one of the highest known in India. The park has a large breeding population of Leopards, and various species of deer. Maharaja Sachin Singh Baghel of Rewa captured a white tiger in this region in 1951. This white tiger, Mohan, is now stuffed and on display in the palace of the Maharajas of Rewa. Bandhavgarh National Park lies on the extreme north-eastern border of the present state of Madhya Pradesh in India and the northern flanks of the eastern Satpura Mountain range. Latitudes and longitudes are 23°30' to 23°46' North and 80°11' to 80°36’east. The altitude of the park varies between 410 metres (1,345 ft) and 810 metres (2,657 ft). The geology is soft feldspathic sandstone with quartzite. The soil is generally sandy to sandy-loam. At least twenty streams rise or flow through the park, amongst the streams Umrar (forming the western boundary) is the largest. The other important streams are Johilla (eastern boundary), Janadh, Charnganga, Damnar, Banbei, Ambanala and Andhyari Jhiria. All these streams eventually flow into the river Son, which is an important southern tributary to the Ganges. At the centre of the Park is the Bandhavgarh hill, rising 811 m above sea level – surrounding it are a large number of smaller hills separated by gently sloping valleys. These valleys end in small, swampy meadows, locally known as 'bohera'. The lowest point in the park is at Tala, 440 m above sea level. The terrain is of great rocky hills rising sharply from the swampy and densely forested valley bottoms. The finest of these hills is Bandhavgarh, sided with great cliffs and eroded rocks. The park lies within the tropical monsoon climatic zone, characterized by well-defined winters, summers and rains. Temperature as low as 2.2 °C and as high as 44 °C have been recorded. Average rainfall is 1,173 millimeters (46 in), most of which falls during the monsoons. Some rains result from the cyclonic depressions as well, between the months of November and February.Cost for Any Airfare, Any Bus Fare, Insurance Premiums, Tatkal railway reservation charges etc. Cost for optional Tours, Up-gradation Charges. Any transportation which is not mentioned in the itinerary. Payment for service provided on a personal request basis. Personal expenses such as phone calls, laundry, soft drinks, mineral water, incidentals, postern charges, tips etc. Expenses incurred due to change in oil price, mishaps, landslide, strikes, political unrest etc. In such case extra will be charged as per actual which will be collected from the guest directly. Meals/Food other than specified. The item which is not mentioned in the ‘Cost Includes’.

Booking Procedure: We request to issue us the details and documents as follows

We Deals in Tour Operators Services. Looking for a convenient tour of the Andaman & Nicobar Islands at a reasonable cost? WE bring you the best packages in the Andaman & Nicobar Islands and is committed to providing you the best experience so that you make the Andaman Islands as your favorite Holiday destination. MITALI TRAVELS, almost for seven years since 2007 ,it has guided numerous number of tourists from various parts of India to enjoy the nature’s heavenly paradise. We are specialized in honeymoon packages..There is no other place for honeymoon couple for spending their life's special moments. It is an ideal destination for honeymooners.and we will give you those special unforgettable moments which you can cherish for life time. We deal in group packages along with family packages too. Just relaxing on the silver beaches is a great way to relax and enjoy sunsets on beach during your trip to Andaman.. Pick up from airport til the drop we will give you the best time ever..not only packages we make moments too. Along with Andaman we deal in other territories also so that you get the true essense of India. Himachal,kashmir,kerala,rajasthan etc are few of those destinations you can visit with us. For each and every requirement in your travel department,we are there for you always. Read More...