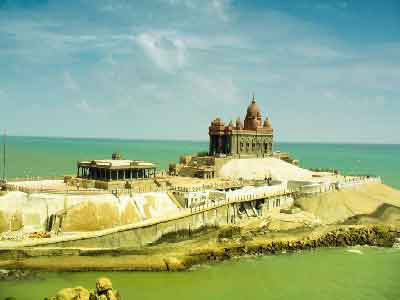 Pondicherry:
Pondicherry is an urban agglomeration and is affectionately known as Pondy. It has been officially known by the alternative name Puducherry since 2006. The geography of Pondicherry is the same as that of coastal Tamil Nadu as its average elevation is at sea level, and a number of sea inlets can be found. Pondicherry experiences coastal erosion and is protected against the sea by a 1.25 mile (long seawall. A weather-beaten cement plaque with the year 1952 is still visible.

Chennai:
Chennai is the capital city of Tamil Nadu, located on the Coromandel Coast off the Bay of Bengal. Chennai is a major commercial, cultural, economic and educational center in India and also known as the Cultural Capital of South India. With the second largest port in India, Chennai had been part of successive South Indian kingdoms through centuries. The recorded history of the city began in the colonial times with the arrival of British East India Company.

Thanjavur:
Thanjavur Also known as Tanjore, Thanjavur have been derived from "Tanjan", a legendary asura in Hindu mythology. While the early history of Thanjavur remains unclear, the city first rose to prominence during the reign of the Medieval Cholas. It served as the capital of the Chola Empire and after the fall of the Cholas, the city was ruled by various dynasties like Pandyas, Vijayanagar Empire, Madurai Nayaks, Thanjavur Nayaks, Thanjavur Marathas and the British.

Rameswaram:
Rameswaram in the Ramanathapuram district of Tamil Nadu is located on Pamban Island separated from mainland India by the Pamban channel. Together with Varanasi, it is considered to be one of the holiest places in India to Hindus. It is situated in the Gulf of Mannar, at the very tip of the Indian peninsula and is connected to mainland India by the Pamban Bridge. According to legend, this is the place from where the Hindu god Rama built a bridge, across the sea to Lanka to rescue his wife Sita from Ravana. The Ramanathaswamy Temple is located at the centre of the town and is closely associated with life of Rama.

Madurai:
Madurai is the third largest city and is located on the banks of River Vaigai. It has been a major settlement for two millennia and is one of the oldest incessantly inhabited cities in the world. Madurai is closely associated with the Tamil language as all the 3 primary congregations of Tamil scholars were held in the city. The recorded history of the city goes back to the 3rd century BC as city is believed to be of significant antiquity.

Kanyakumari:
Kanyakumari, also referred to as Cape Comorin earlieris located at the southernmost tip of India. It is the geographical end of the mainland. The closest major cities are Nagercoil and Thiruvananthapuram, the capital of Kerala, which makes it a popular tourist place in India. Kanyakumari takes its name from the Hindu Goddess Kanyakumari whose temple is situated in the town of it’s, on the sea-shore, and is very confluence of the three water-bodies – the Arabian Sea, the Bay of Bengal and the Indian Ocean. Kanyakumari has been a great centre for art and religion for centuries and was an area of great trade and commerce during rule of Cholas, the Cheras, the Pandyas and the Nayaks.

Sripuram (Golden Temple):
The golden temple of Sripuram is a spiritual park at the foot of a small range of green hills in a place known as "Malaikodi" in Vellore. The temple is at the southern end of the city of Vellore, at Tirumalaikodi, located on 100 acres of land. The specialty of Sripuram is the Lakshmi Narayani temple whose 'Vimanam’ and ‘Ardha Mandapam’ have been coated with gold both in the interior and exterior. The temple has been constructed by Vellore-based Sri Narayani Peedam.

Mahabalipuram:
Mahabalipuram, derived from 'Mamallapuram' is the prior and colloquial name of a town in Kancheepuram district of Tamil Nadu. With an average elevation of 12 metres, is now officially called Mamallapuram. Mahabalipuram was a 7th century port city of the South Indian dynasty of the Pallavas around 60 km south from the city of Chennai. The name Mamallapuram is named after the Pallava king Narasimhavarman I, who took on the epithet Maha-malla, as the favourite sport of the Pallavas.Air fare train fare. guide & entry fee during sight seeing. boating horse riding etc. Portages, Laundry, Food, Tips, Liquor,All road taxes, toll taxes, parking fee.Any other item not specified in cost includes.