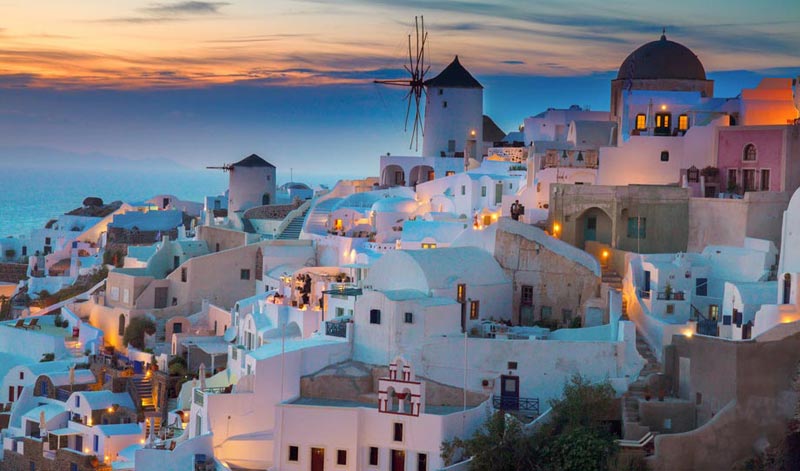 Offered by : Angel Tour and Travels 0/5

03 Nights(Split) Stay at Athens 02 Nights Stay at Mykonos 02 Nights Stay at Santorini 7 Breakfast at Hotel(Athens-Mykonos-Santorini-Athens) A full day to enjoy th- Private transfers in Athens for the route airport – hotel - airport with A/C coach. Private transfers in Athens for the route hotel – Piraeus port - hotel with A/C coach. SIC transfers in Mykonos for the route port - hotel - port with A/C coach. SIC transfers in Santorini for the route port - hotel - port with A/C coach Ferry tickets in Economy class including port taxes Half day Athens city tour with Acropolis and Acropolis museum on SIC basis (maximum 4 hours) with a/c coach & Tour Guide + entrance fees to Acropolis and to Acropolis museumInternational Airfare Extension Night Charges Hotel official check-in time: 15:00 p.m. & check-out time: 12:00 p.m. Drinks and beverages are charged upon consumption. Entrance fees to museums and archaeological sites. Any type of mandatory fee like a resort fee / city tax etc has to be paid at the hotel directly, the same in not a part of the package Bedding type is on request basis and subject to availability at time of arrival Rates do not include any early check-in or late check-out Check-in at 1600 Hrs and Check-out at 1100 Hrs The tour cost does not include any cost towards visa , gratuities , meals (not mentioned in itinerary)or any other services, any items of personal nature such as laundry, telephone calls, drinking water etc. unless mentioned above Greece Visa Fees GST OF 5.0% ON TOTAL PACKAGE Overseas travel insurance will be charged extra for the passengers above 55 years Any other expenses of personal nature Anything not mentioned in the cost inclusions list such as currency fluctuation i.e. currently taken as 01 EURO= 73 INR. Rate of Exchange as on date of final payment will be applicable Extra Baggage charges Surcharge Might be Applicable if date falls under any Trade fair/Special Events during the Trip.


About Angel Tour and Travels

Angel Tour and Travels is a reliable tour operator that is acknowledged for rendering amazing tour and travel services. We offer airline ticketing services, cruise services, railway ticketing services, hotel reservation services, car & coach rental services, passport & visa services and travel insurance services. We have a team of professional tour operators that manage, plan, schedule and organize the trips as per the specific requirements of the travelers. Customer satisfaction & safety is our main motto and we strive to meet it by all means. We provide our tour and travel services to both international & domestic travelers. We ensure to provide value-for-money services to the travelers. Read More...