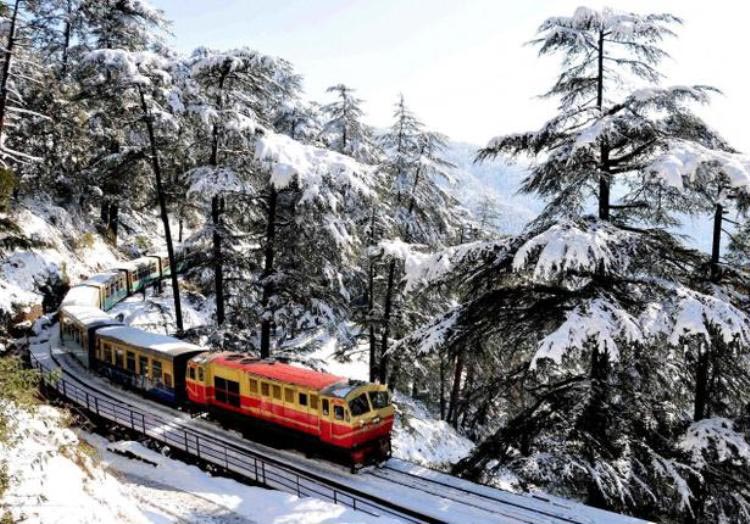 Shimla, the state capital, is very popular among tourists. The Kalka-Shimla Railway is a Mountain railway which is a UNESCO World Heritage Site.[2] Shimla is also a famous skiing attraction in India. Other popular hill stations include Manali and Kasauli.

Dharamshala, home of the Dalai Lama, is known for its Tibetan monasteries and Buddhist temples. Many trekking expeditions also begin here.

The Ridge in is a large road in Shimla which is centre for most of cultural activities of Shimla.

Manali is a hill station nestled in the mountains of the Indian state of Himachal Pradesh near the northern end of the Kullu Valley, at an altitude of 2,050 m (6,726 ft) in the Beas River Valley. It is located in the Kullu district, about 270 km (168 mi) north of the state capital, Shimla. The small town, with a population of 8,096,[1] is the beginning of an ancient trade route to Ladakh and from there over the Karakoram Pass on to Yarkand and Khotan in the Tarim Basin. It is a popular tourist destination and serves as the roadway to other northern hill stations.

Manali is named after the lawgiver Manu. The word Manali is regarded as the changed name of "Manu-Alaya" which literally means "the abode of Manu". Legend has it that sage Manu stepped off his ark in Manali to recreate human life after a great flood had deluged the world. Manali is also often referred to as the "Valley of the Gods". The Old Manali village has an ancient temple dedicated to sage Manu.

Dalhousie is a hill station in Himachal Pradesh, established in 1854 by the British Empire's government in India as a summer retreat for its troops and officials.

It is built on and around five hills, Kathalagh, Potreyn, Terah, Bakrota and Bhangora.[2] Located on the western edge of the Dhauladhar mountain range of the Himalayas, it is surrounded by snow-capped peaks. Dalhousie is situated between 6,000 and 9,000 feet (2,700 m) above sea level. The best time to visit is in the summer, and the peak tourist season is from May to September. Scottish and Victorian architecture are prevalent in the bungalows and churches in the town.

Dalhousie is a gateway to the ancient Chamba Hill State, now Chamba District of the state of Himachal Pradesh of India. This hill region is a repository of ancient Hindu culture, art, temples, and handicrafts preserved under the longest-running single dynasty since the mid-6th century. Chamba is the hub of this culture. Bharmour, the ancient capital of this kingdom, is home to the Gaddi and Gujjar tribes. It has 84 ancient temples dating from the 7th–10th centuries AD.

Khajjiar sits on a small plateau with a small stream-fed lake in the middle that has been covered over with weeds. The hill station is surrounded by meadows and forests. It is about 6,500 feet (2,000 m) above sea level in the foothills of the Dhauladhar ranges of the Western Himalayas and peaks can be seen in the distance.[3] It is part of the Kalatop Khajjiar Sanctuary.

Khajjiar can be reached from Dalhousie, the nearest major town and hill station, by bus in an hour or so. It has a rare combination of three ecosystems: lake, pasture and forest.

On 7 July 1992, Mr. Willy T. Blazer, Vice Counselor and Head of Chancery of Switzerland in India brought Khajjiar on the world tourism map by calling it "Mini Switzerland". He also put a sign board of a yellow Swiss hiking footpath showing Khajjiar distance from the Swiss capital Bern-6194 km. Khajjiar is among the 160 locations in the world that bear topographical resemblance with Switzerland. The counselor also took from Khajjiar a stone which will form part of a stone collage around the Swiss Parliament to remind the visitors of Khajjiar as a Mini Switzerland of India.Entry ticket of any destination, telephone, laundry, or anything which have not mentioned above.
Child with extra bed sharing parents room increase 25% of the above cost child without extra bed has to pay increase 15% of the above cost (below 11 years)
Any Expanse of personal nature
Cable car ride, boating & horses
Tables, drinks, insurance
Entrance fees to mountains destination
Poni and Palki charges, helicopter service charge, poster charges

A responsible and responsive name in the tourism and hospitality industry of Haridwar, Uttarakhand, Rudra Travel offers complete travel related services for all over India, especially New Delhi, Shimla, Uttaranchal, and Uttar Pradesh. Incepted with the sole purpose of promoting tourism in India, Rudra Travel aims at bringing out the age old architectural and cultural heritage of the state. We offer excellent services for Tour Operators, Airline Ticketing, Railway Ticketing, Event Organizers, Car & Coach Rental, Bus Ticketing Services, Hotel Booking Services, and India Tours. Rudra Travel has a team of qualified and resourceful individuals who have designed specific packages for Adventure Tours, Beach Island Tours, Pilgrimage /Religious Tours, Honeymoons Holidays, Hill Station Tours. We aim at providing consistent service quality in order to make long lasting relations with our clients for business or leisure travel. We can be contacted for these standard packages that we offer at inexpensive rates, or we’d love to do some customization for you! Operating from Haridwar, Uttarakhand, we offer our services all over India, mainly New Delhi, Shimla, Uttaranchal,Jammu & Kashmir and Uttar Pradesh. Contact us to avail our services today! Read More...