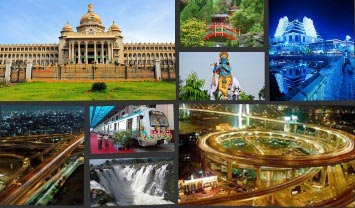 Bangalore is the capital of the southern Indian state of Karnataka. It is the largest city in India and is the center of fifth largest metropolitan area located in southern India on the Deccan Plateau. Bangalore is known as the "Silicon Valley of India" because of its role as the nation's leading information technology (IT) exporter. The city is amongst the top ten preferred entrepreneurial locations in the world. Bangalore attractions Lalbagh Botanical Garden - Enchanting garden is set on 240 acres with a rare collection of tropical and sub-tropical trees and plants, and a majestic glasshouse built on the lines of London's Crystal Palace. The garden was made in the 17th century - started by Hyder Ali, and later completed by his son Tipu Sultan. It derives its name "Lal Bagh" from a collection of red roses that bloom throughout the year there. The show also features an exhibition of hybrid vegetables. Cubbon Park - Located in the heart of city, set on a 300 acre area, Cubbon Park is a great place to laze around in the lush green paradise. It has a treasure of different species of exotic plants. The park was named after the erstwhile Commissioner of Bangalore, Sir Mark Cubbon. An aquarium is also located in Cubbon Park, with many varieties of exotic and ornamental fish. Bangalore Palace - Built in 1887 by Chamaraja Wodeyar, Bangalore Palace is inspired by England's Windsor Castle. This beautiful palace has Tudor style architecture, with fortified towers, arches, green lawns, and elegant woodcarvings in its interiors. Coorg attractions Coorg - Coorg this place will haunt you forever with its timeless splendor. It offers you a fascinating past, spectacular natural beauty, lip-smacking cuisine and the strong aroma of coffee and oranges. Set amidst verdant valleys, imposing mountains and teak wood forests, this is one of the most beautiful hill stations you can visit. Bekal attractions Bekal Fort - Bekal lies in Kasargod district of Kerala. Bekal is a small village on the shores of Arabian sea. The prime tourist attraction at Bekal is the Bekal Fort. The Bekal Fort spreads over 40 acres of land and is the largest fort in Kerala. The Fort is almost 300 years old and still a controversy exists regarding the origin. The Fort has a watch tower facing the sea. Many parts of the Fort are constantly drenched by the sea waves.Any meals other than those mentioned above Any train fare or airfare Other transportation that is not mentioned in the itinerary Entrance fees to the monuments, amusement parks & boating charges Any other charges like portage at the airports and hotels, tips, insurance, mineral water, wine, telephone charges, and all items of personal nature Any other services apart from those mentioned in inclusions Any other expenses caused by factors beyond our control like rail and flight delays, roadblocks, vehicle mal-functions, political disturbances etc GST applicable on total package cost