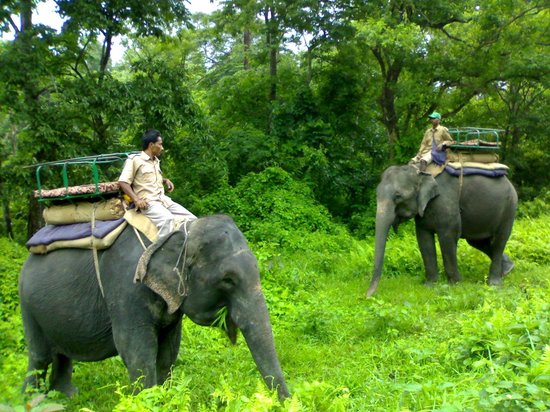 The Dooars or Duars are the Floodplains and Foothills of the Eastern Himalayas in North-east India Around Bhutan. this Region is Divided By the Sankosh River Into the Eastern and the Western Dooars, Consisting of An Area of 8,800 Km² (3,400 Sq Mi). the Western Dooars is Known as the Bengal Dooars and the Eastern Dooars as the Assam Dooars. the Dooars are Famous for the Tea Gardens Which Were Planted By the British. for Working in the Gardens, They Imported Labour from Nepal and the Chota Nagpur and Santhal Parganas. the Oraons, Mundas, Kharia, Mahali, Lohara and Chik Baraik are the Tribals from These Areas. tourism is An Important Source of Income for the Residents. the Economy of Dooars is Based On Three "t"s – Tea, Tourism and Timber. the Main Industry of the Dooars Region is the Tea Industry. Thousands of People are Engaged in the Tea Estates and Factories. Several People are also Engaged in the Cultivation of Bettlenuts Which also Contributes to the Economy. Cultivation of other Crops is Done Mainly for Local Consumption. the Area is Dotted By Several National Parks and Wildlife Sanctuaries Which Attract a Lot of Tourists from all Over India and Abroad, Making It An Important Contributor to the Economy and also Employer of a Number of People. the Timber Industry, Both Legally and Illegally, Flourishes in this Region. a Number of Saw Mills, Plywood Industries and other Allied Business also Act as An Important Contributor to the Economy. the Dooars Act as Doorways to Bhutan; Thus, the Export-import Industry also Flourishes in the Area. the Towns of Jaigaon, Siliguri and Phuentsholing are Important Hubs of the Export-import Industry. as the Region is Near the International Borders of Bhutan, Nepal and Bangladesh, the Border Security Force (bsf), the Central Reserve Police Force (crpf), Indian Army and Indian Air Force Maintain a Large Presence in the Area. this Leads to a Large Population of Semi-permanent Residents Who Bring Money Into the Local Economy. forests and Animals the Beauty of the Region Lies Not Only in Its Tea Gardens But also in the Dense Jungles that Make Up the Countryside. Many Wildlife Sanctuaries and National Park like Manas National Park in Assam, Jaldapara National Park, Buxa National Park, Gorumara National Park, Chapramari Wildlife Reserve and the Mahananda Wildlife Sanctuary in West Bengal are Located in this Region. a Number of Rare Endangered Species of Animals like Tiger, Rhinoceros and Elephant Make Their Habitat in the Forests of the Dooars. other Animals Includes Different Types of Deer, Bison, Birds and Reptiles. a Railway Line Runs Through the Tea Gardens and the Various Protected Areas and a Number of Elephants have Been Killed in Collisions with Trains. places of Interest jayanti-bhutanghat-buxa Fort-malbazar-teesta River-hasimara-coronation Bridge-phuntsholing-chalsa.