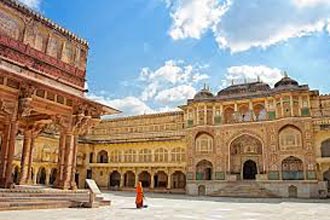 PACKAGE DETAILS The name ‘Rajasthan’ conjures up visions of forts, deserts, palaces and national parks. Rajasthan tourist places are all about luxury, grandeur, lifestyle and richness of a state. Also, the culture of this city has something wonderful to offer the visitors. Jaipur, the land of Maharajas, flaunts of an elaborate architecture and breath-taking views. Jodhpur, a famous ‘Blue City’, is quite famous for its blue buildings. Jaisalmer & Bikaner are gateway to the desert expanse of Rajasthan. The ‘Magnificent Rajasthan’ tour package, spans over 6 days& 5 Nights, covers some of the best destinations in Rajasthan which include Jodhpur, Bikaner, Jaisalmer and Jaipur. Read the itinerary given below for your kind perusal. Visit of Blue City Mehrangarh Fort Visit of Jaisalmer Laxmi Niwas Palace National Research Center on Camel Chandra Mahal Palace Welcome drink on arrival Accommodation on twin Sharing Basis. Meal Plan (Please refer Cost sheet) Exclusive vehicle for transfers & sightseeing. Vehicle will not be at disposal it will be available to guest as per itinerary only (point to point basis) except for Premium+ category. All permit fees & hotel taxes (as per itinerary). HOTEL Luxury HotelAir Fare / Train fare. 5% GST extra Entrance fees & guide charges. Any personal expenses such as laundry, telephone calls, tips & gratuity, mineral water, soft & hard drinks, rafting, rock climbing, paragliding, joy ride (Toy Train), porterage. Insurance coverage, overstay due to strike, political disturbance, natural calamity. Items of personal nature like porter-age, tips, laundry. Any expenses arising out of unforeseen circumstances like flight delay / cancellation / hike in fare, strike or any other natural calamities or any emergency evacuation expenses. Any additional meals. Anything not mentioned in Inclusions.

Traveling to different locations with your friends or family is always a great way to enjoy yourself and make new acquaintances. Moreover, getting an escape from your monotonous routine is another benefit of traveling. So, if you are planning a tour with your closed ones, then come directly to us for amazing travel packages and travel deals. Shatakshi Group is one of the distinguished travel companies that are engaged in offering dependable tour and travel services to the tourists across Ghaziabad (Uttar Pradesh, India). Mr. Ankur Srivastva (Owner) is the brilliant mind behind the inception of our company. He laid the foundation stone of the company in the year 2005. We are providing travel services, hospitality services, and MICE ventures. Our services can be availed by professionals, students, and any other individual. The company has been able to create a reputed position amongst the corporate, group of hotels, institutions, and FIT segments. Our services include airline ticketing services, passport & visa services, hotel booking services, car rental services, and event organizing services. So, feel free to contact us anytime. Read More...