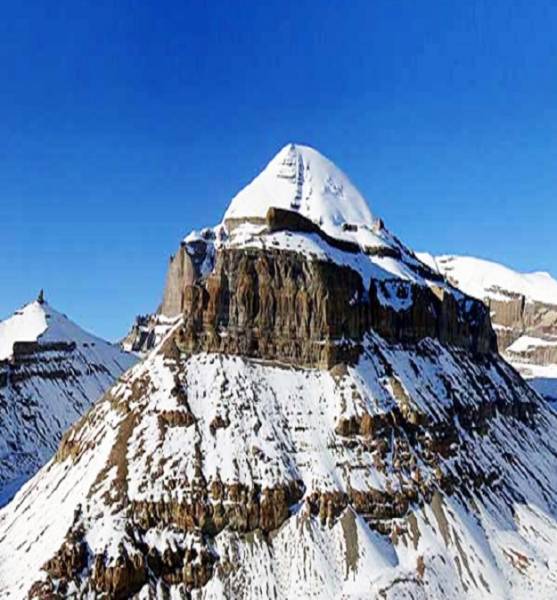 Holy Mt Kailash and Mansarowar Lake, Center of Creation & the Universe are as Old as the Creation. Thousands of Sages, Ordinary Mortals, Philosophers and Even Gods Had Submerged in the Blissful Trance At the Very Sight of this Divine Grandeur. It is the Meru, Sumeru, Sushumna, Hemadri (golden Mountain), Ratnasanu (jewel Peak), Karnikachala (lotus Mountain), Amaradri, Deva Parvatha (summit of Gods), Ganaparvatha, Ajatadri (silver Mountain). Regarded as Swayambhu, the Self-created One, Everythingis Said to Emanate from Here and Finally Returns Here. Mind is the Knot Tying Consciousness and Matter-that is Set Free Here. famously Known to Be An Abode of Lord Shiva and His Divine Consort Parvati, Mt. Kailash Expounds the Philosophy of Purusha and Prakriti-shiva and Shakti. the Radiant Silverly Summit is the Throne of Truth, Wisdom and Bliss-sachidanandam. the Primordial Sound Aum (nadabindu) from the Tinkling Anklets of Lalita Prakriti Created the Visible Patterns of the Universe and the Vibrations (dvani) from the Feet of Lord Shiva (nataraja) Weaved the Essence of Atman, the Ultimate Truth. mt. Kailash is Considered to Be the Centre of Hindu Philosophy and Civilization. Kalpa Viruksha Tree is Supposed to Adorn the Slopes. South Face is Described as Sapphire, East as Crystal, West as Ruby and North as Gold. the City of Kubera is also Situated Here. Ganga After Originating from the Toe of Mahavishnu Enters the Lunar Circle and Descends Further from Kailash After Circuiting It Seven Times and Then Ultimately Divides Herself Into Four Rivers. the Major Rivers of Nepal and India Originating from this Area are Brahmaputra(lohita), Indus(sindhu), Sutlej(shatadru) and Karnali. Every Object in this Area is Sanctified and Each One is Related to Gripping Legends. as One Ascends Through Parikrama, One Encounters Holy Peaks of Ravana Parvat, Hanuman Parvat, Padmasambhava, Manjusri, Vajradhara, Avalokiteswara, Jambeyang, Shavari, and Norseng. the Scriptures Reiterate that One, Who Takes the Holy Dip At Mansarovar and Carries Out the Parikrama Around Kailash, is Absolved of His/her Sins Through Generations and is Absorbed Into the Supreme Finality. There is No Re-birth; Sorrows or Joys and He/she Will Be with Ultimate –the Lord Shiva. in other Words, They Become Shiva. in Addition to the Hindus, the Entire Region is also One of the Most Important Pilgrimage Centers for the Buddhists. They Worship Demchok (buddha in Forceful Form) Seated On the Summit of Kailash. It is also Called Dharmapala,One Version Quotes the Deity as a Form of Shiva’s Manifestation. the Description of the Deity is More or Less like Shiva. Devi is also Given a Similar Form like Parvati. Buddhists Adore Kailash as Kang Ringpoche and Manasarovar as Tso Mapham. Guru Rinpoche (the Great Indian Master Padmasambhava Who Introduced Buddhism) and Saint Milerapa are Greatly Revered Here By the Pilgrims. Since Tantrism Runs Through the Main Core of Buddhism Here, Their Customs and Practices Would Be Found Running Close and Parallel to Hindu Traditions. like Hindus, They also Consider (dolma (devi) and Gauri Kund (thuki Zingbu) as Holiest Spots. Buddhists Strongly Believe that Pilgrimage to this Place Liberates Them to Nirvana. Besides, Jains Acknowledge Kailash as Astapada and Padmahrada. It is Believed that Adinath Vrishabdeva – the First Tirtankara Attained Nirvana Here. a Few Claim that Guru Nanak Meditated Here. Across the River Chu, There On the Nyanri Range Stands An Impressive Temple. Inside this Monastery There is a Marble Statue Radiating Peace and Compassion. this Statue is Claimed to Be that of Guru Nanak. the Entire Area Echoes with Spiritual Vibrations. Even the Agnostics Shall Discover New Balance Amidst that Fathomless Serenity. One Has to Experience It. the Common Belief is that Those Who are Ordained Only Could Be There.

All notice of cancellation must be sent to our office in writing; verbal cancellation will not be accepted. There is no refund for services not used. In case of any cancellation the booking amount will be completely forfeited. In addition, the following cancellation rules will be applicable on the balance amount payable.

The above cancellation rules are applied as per the rules and regulation of China Tibet Tourism Bureau and (IPSC) Indian pilgrims service Center, China.