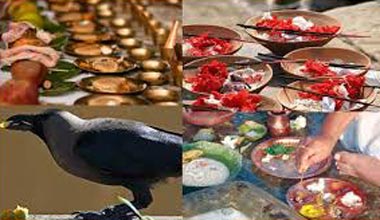 Online Pind Daan is a service given by us for people who have not time to visit to Gaya, Varanasi and Allahabad, but want to give Pind or Tarpan to his ancestors or departed family members, In this service, In behalf of you all the pooja is done by other people for your ancestors, and he or she will give Pind or Tarpan to your ancestors behalf of you, And for your confirmation of pind daan puja a video cd has been send to you via courier.

We provide this service to people who has no time to come Gaya, Varansai and allahabad. whether he or she is NRI or belongs from anywhere India.
The following information is required for offering Pind Daan

The complete Name and Address of the person for whom you want to offer Pind Daan.

- Your relationship with him.
- At what age He / She died.
- How many years or months or days back He or She died.
- Reason of Death
- Approximate Time of Death (in A.M. or in P.M.).
- Place of Death
- Scanned or Hard Copy of his or her Photograph (optional)
- One Photograph of deceased person.
- Name of family member on whose behalf the Puja is to be performed and a list of other family members.
- Permanent and Correspondense address

Our management / Brahman team will monitor the event personally. We will organize "Pandit" ,"Places" and all Puja elements (Puja Itmes,Vidhi,Mantra) of Puja as per your community like Punjabi, Marwari, Gujrati, Tamil, Bengalies or Maharshtrian etc. We will arrange video recording for all these events.

Note: - According to Garuda Purana and many Religious books, anyone can perform religious rituals on your behalf. It would be considered successful and all the credit will be yours, as if you performed them.

Apsara Tours & Travels is a renowned travel agency engaged in providing top-notch travel services. Operational from Gaya (Bihar, India), we are offering cruise booking services and hotel booking services to our business and leisure travelers. We are a client-centric firm, thus prioritize their requirements while organizing domestic and international tour, to make it a pristine and perfect tour. With our car & coach rental services, we aim to fulfil varied travel requirements of our worthy clients. As a travel agency, we commenced our business operations in 1999. Since then, our operational activities are led by Mr. Abhishek Kumar, owner of the company. Read More...