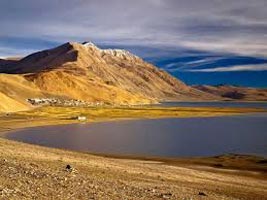 Short description: A beautiful trekking that departs from the high-altitude Tsomoriri Lake, taking one over the high Parang La pass into the Spiti Valley, finishing at Kibber village. Spiti resembles Ladakh & Zangskar in its Tibetan-style Buddhist culture and has many interesting monasteries to visit.Any flight tickets.
Sleeping Bags, trekking shoes and clothing sun cream.
Any Kind of Personal Expenses or Optional Tours / Extra Meals Ordered
Any thing not specifically mentioned under the head "Prices Included".
Tips, Insurance, Laundry, Phone Calls.
Any Kind of Drinks (Alcoholic, Mineral, Aerated)
Cost incidental to any change in the itinerary/ stay on account of flight cancellation due to bad weather, ill health, roadblocks and/or any factors beyond control.

Total cost for this trip.

Exotic Travel is identified as one of the largest Tour Operators from Leh Ladakh, Jammu and Kashmir. Since our inception in the year 2003, we have been striving to bring in better facilities and services for the tourism sector and to promote eco-tourism. With a branch office in the capital of India, Delhi, we boast of proficiency in catering to the various parts of this multicultural country. We are a reliable name for Car & Coach Rental, Event Organizers, Hotel Booking Services, and India Tours, specializing in providing services for Trekking, Motor Biking, and Cultural Cycling all over India. Operational from Leh Ladakh, Jammu and Kashmir, Exotic Travel is a distinguished name in the tourism and hospitality industry. We have a team of qualified and professional organizers and planners working for us who excel at providing the desired comfort and convenience in a journey. Our travel managers have strategically designed packages and itineraries for Group holidays, Adventure Tours, and Wildlife Tours for all of India. We have earned a specialization in providing services for Trekking, Motor Biking and Cultural Cycling in Leh Ladakh. Give us a call to learn more about our services that we offer at reasonable rates. We are capable of offering customized services as well. Read More...