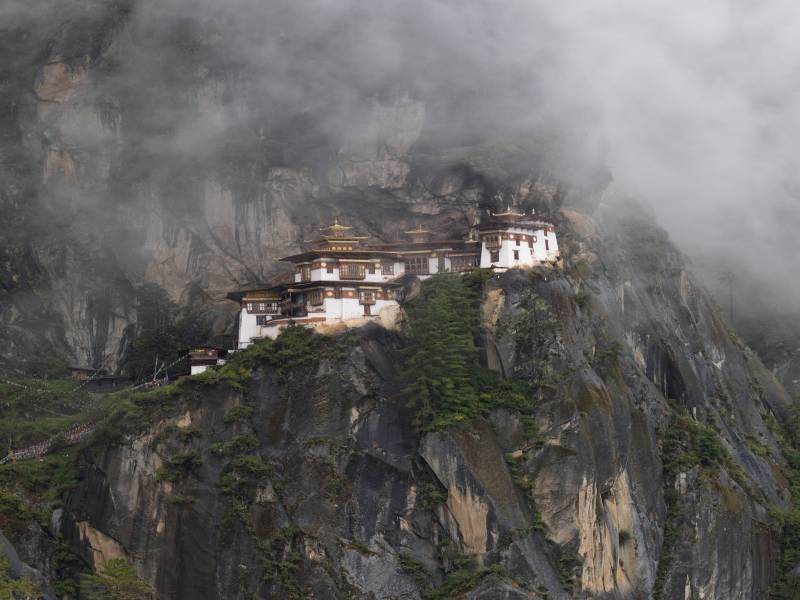 Bhutan bhutan, a Buddhist Kingdom On the Himalaya's Eastern Edge, is Known for Its Monasteries, Fortresses (or Dzongs) and Dramatic Landscapes that Range from Subtropical Plains to Steep Mountains and Valleys. in the High Himalayas, Peaks such as 7,326m Jomolhari are Popular Trekking Destinations. Paro Taktsang Monastery (also Known as Tiger's Nest) Clings to Cliffs Above the Forested Paro Valley. punakha punakha is a Town in the Himalayas of Bhutan. It's Known for the Punakha Dzong, a 17th-century Fortress At the Juncture of the Pho and Mo Chhu Rivers. the Fortress Hosts the Punakha Tshechu, a Religious Festival Featuring Masked Dances and Music. in the Surrounding Punakha Valley, Temples Include the Fertility-focused Chimi Lhakhang and the Hilltop Khamsum Yulley Namgyal Chorten, Which Has River and Mountain Views. thimphu thimphu, Bhutan's Capital, Occupies a Valley in the Country's Western Interior. in Addition to Being the Government Seat, the City is Known for Its Buddhist Sites. the Massive Tashichho Dzong is a Fortified Monastery and Government Palace with Gold-leaf Roofs. the Memorial Chorten, a Whitewashed Structure with a Gold Spire, is a Revered Buddhist Shrine Dedicated to Bhutan's Third King, Jigme Dorji Wangchuck. paro paro is a Valley Town in Bhutan, West of the Capital, Thimphu. It is the Site of the Country's Only International Airport and is also Known for the Many Sacred Sites in the Area. North of Town, the Taktsang Palphug (tiger's Nest) Monastery Clings to Cliffs Above the Forested Paro Valley. Northwest of Here are the Remains of a Defensive Fortress, Drukgyel Dzong, Dating from the 17th Century.To and fro Air fare and Airport transfer for 'Joining and Leaving Tour Guests' Entrance fees 5% GST Any applicability of new taxes from Government Any upgradation in Airline class or hotel room category Cost of Insurance Cost of Pre/Post tour hotel accommodation Any extra expense such as route change, Airline change, Date change, Accommodation facilities, etc incurred due to the unforeseen, unavoidable forced majeure circumstances during the tour Any extra cost incurred on behalf of an individual due to illness, accident, hospitalisation, or any personal emergency Any services or activity charges other than those included in the group tour itinerary Anything specifically not mentioned in the 'tour price includes' column