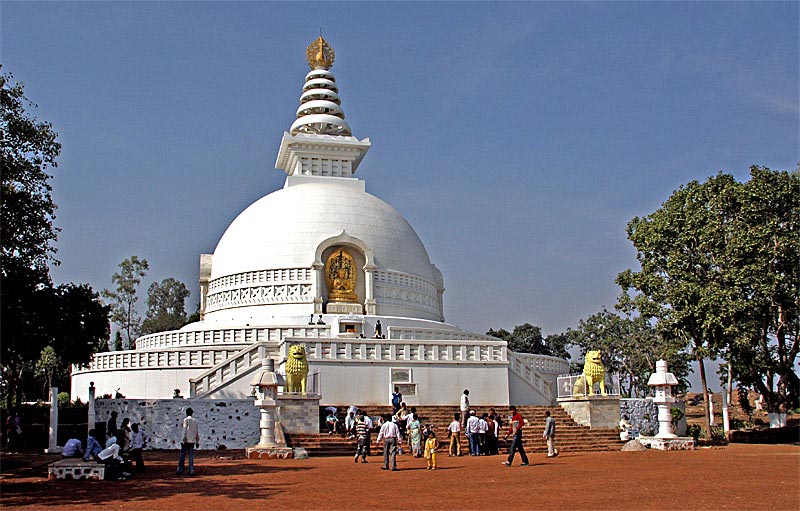 LUMBINI:
Now in Nepal is the birth place of Buddha . It is the place where Queen Mayadevi is said to have given birth to Siddhartha Gautama, who in turn gave birth to the Buddhist tradition. The Buddha lived between roughly 563 and 483 BCE. Lumbini is in the foothills of the Himalaya 25 km east of the municipality of Kapilavastu, where the Buddha is said to have lived till the age of 29.. Lumbini has a number of temples, including the Mayadevi temple, Also here is the Puskarini or Holy Pond - where the Buddha's mother took the ritual dip prior to his birth and where he, too, had his first bath.

BODHGAYA:
The Gaya District of Bihar where Prince Siddartha Gautama became Buddha The Enlighted One . About 250 years after the Enlightenment, the Buddhist Emperor, Ashoka visited the site and is considered to be the founder of the Mahabodhi Temple whose architecture is superb. The basement of the present temple is 15m by 15m square and has a height of 52m which rises in the form of a slender pyramid tapering off from a square platform. On its four corners four towers gracefully rise to some height. The whole architectural plan gives pose and balance to the observers. Inside the temple there is a 1700 years old colossal image of the Buddha in the "touching the ground pose", bhumisparsha mudra. This image is facing east exactly at the place where the Buddha in meditation with his back to the Bodhi tree was enlightened. The present tree is considered only as the descendant of the original tree.For seven days after the Enlightenment, the Buddha continued to meditate under the Bodhi tree without moving from his seat. During the second week he practiced walking meditation.

KUSHINAGAR:
The place where Buddha breathed his last. The Mahaparnirvana Temple which stands on the same plinth as the main Nirvana Stupa behind it. The reclining Nirvana statue of Lord Buddha inside the temple is 6.10 metres long and is made of monolith red - sand stone. It represents the "Dieing - Buddha" reclining on his right side with his face towards the west. It is placed on a large brick-pedestal with stone-posts at the corners..Nirvana Chaitya is located just behind the Main Parinirvana Temple. It was excavated by Carlleyle in the year 1876. During excavations, a copper-plate was found, which contained the text of the "Nidana-Sutra" which concluded the statement that plate had been deposited in the "Nirvana-Chaitya" by one Haribala, who also installed the great Nirvana Statue of Buddha in the temple front. A copper vessel was also recovered which contained silver coins of Kumar Gupta, an emperor of Gupta Dynasty, 5th Century A.D. Ramabhar Stupa, also called a Mukutbandhan-Chaitya, is the cremation -place of Buddha.