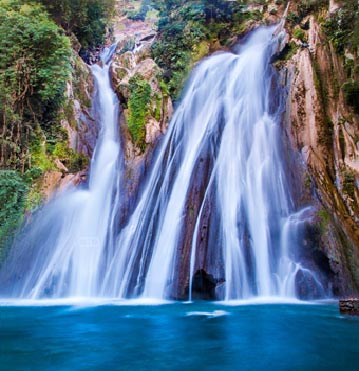 Yamunotri: yamunotri is the Origin of the Yamuna River and the Holy Seat of the Goddess Yamuna in Hinduism. It is Situated in the Garhwal Himalayas and Located Approximately 30 Kilometers North of Uttarkashi. It is One of the Four Sites in India's Chhota Char Dham Pilgrimage and Source of the River Yamuna. Yamunotri is the Westernmost Shrine in the Garhwal Himalayas, Perched Atop a Flank of Bandar Poonch Parvat. The Chief Attraction At Yamunotri is the Temple Devoted to the Goddess Yamuna. Gangotri: gangotri is a Hindu Pilgrim Town On the Banks of the River Bhagirathi On the Greater Himalayan Range, At a Height of 3,100. Gangotri, the Origin and Seat of the Goddess Ganga, is One of the Four Sites in the Char Dham Pilgrimage Circuit. The River is Called Bhagirathi At the Source and Acquires the Name Ganga from Devprayag Onwards Where It Meets Another River Alaknanda. The Origin of the Holy River is At Gaumukh, Set in the Gangotri Glacier. Rishikesh rishikesh is Located in the Foothills of the Himalayas and is Known as 'the Gateway to the Himalayas'. Rishikesh is Located About 25 Km North of Holy City, Haridwar. Legends State that Lord Rama Did Penance Here for Killing Ravana, and Lakshmana, His Younger Brother, Crossed the River Ganges, At a Point, Where the Present 'lakshman Jhula' Bridge Stands Today. The Sacred River Ganges Flows Through Rishikesh and Leaves the Shivalik Mountains in the Himalayas, Flowing Out Into the Plains of Northern India. Several Temples, Ancient with New are Found Along the Banks of the Ganges in Rishikesh. Pipalkoti: pipalkoti is a Small and Scenic Town Situated At 17kms After Chamoli On National Highway- 58. Pipalkoti Acts a Relaxation Point for People Traveling to Badrinath, Hemkund Sahib and Famous Valley of Flowers. Pipalkoti is Nestled Amidst Lush Green Mountains and Terraced Fields and Provides Delightful Views of the Snow Clad Mountains in Addition to Green Hills all Around. The Place is also Known for Its Restaurants and Eat-outs. Haridwar haridwar is An Important Pilgrimage City, Companioned By River Ganges. The River Ganges After Flowing for 253 Kilometres from Its Source At Gaumukh, Enters the Indo-gangetic Plains of North India for the First Time At Haridwar, Which Gave the City Its Ancient Name, Gangadw�ra. Haridwar is Viewed as One of the Seven Holiest Places to Hindus. Amidst the Kumbha Mela, Millions of Pilgrims, Devotees, and Tourists Congregate in Haridwar to Perform Ritualistic Bathing On the Banks of the River Ganges to Wash Away Their Sins. Brahma Kund is Located At Har Ki Pauri and is Considered to Be the Most Sacred Ghat of Haridwar. Badrinath: badrinath is a Hindu Holy Town that is the Most Important of the Four Sites in India's Char Dham Pilgrimage. Badrinath Was Re-established as a Major Pilgrimage Site By Adi Shankara in the Ninth Century and in Recent Years; Its Popularity Has Increased Significantly, with An Estimated 600,000 Pilgrims Visiting During the 2006 Season, Against 90,676 in 1961. Badrinath Has Been Mentioned as a Holy Place in Hindu Scriptures for Thousands of Years. Kedarnath kedarnath is a Hindu Holy Town and the Most Remote of the Four Char Dham Sites. Kedarnath is Located in the Himalayas, About 3584m Above Sea Level Near the Head of River Mandakini. The Site is Flanked By Breathtaking Snow-capped Peaks. Kedarnath Hosts One of the Holiest Hindu Temples and the Kedarnath Temple is a Popular Destination for Hindu Pilgrims from all Over the World. Kedarnath Has Been in Existence from the Mahabharata Era When the Pandavas are Supposed to have Pleased Lord Shiva By Doing Penance, Here. There are 2 Ways to Reach Kedarnath, One of Them is Via Foot for a Steep 14 Km Trek Through a Paved Path and Second Way is By Helicopter Service. Starting Price - Inr 28,239/- for 8 Pax & Inr 41,709/- for 2 PaxHorse Ride, Doli, Jeep Charges Etc. Portages, Laundry, Tips Exp. ropeway Charges At Mansadevi Temple 4.95% Govt. service Tax. any other Item Not Specified in the Itinerary