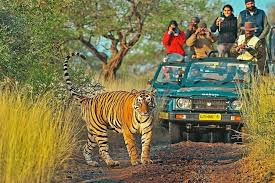 Holiday Wildlife Tours is a one- stop shop to cater for FIT’s / GIT’s / Family / Friends / Single / Women / Student for the Inbound and Outbound traveler. This includes arranging accommodations, sightseeing, guides, transfers, holiday packages, ticketing, foreign exchange, visa, conferences and adventure activities.Where to go, what to do and what to see is our specialty. Products and itineraries are carefully designed, keeping in mind the exact requirements of clients and our immense experience in the region allows us to make a lot of suggestions and offer careful advice.Holiday Wildlife desires to make each one of its destinations in India & Sub continental neighbouring countries a combination of comfortable settings, and customised activities. In our experience, we have discovered that guests like this combination perhaps more than any other. Our tours throughout India cover three primary areas- People, Culture and Wilderness. Designed to suit individual needs, be it river rafting or a boat cruise, culture or culinary trails, trekking or just lazing, we will introduce you to the enchantment of Incredible India a heartfelt experience rather than a mere getaway.Travel with Holiday Wildlife and discover a whole new world of comfort and luxury through our holiday plans and packages, which you will remember for the rest of your life.Our Mission Our core mission is to provide comprehensive holiday experiences with best of quality service and true value for money. Our Vision To excel as the best Holiday Management Provider in India & Sub continental neighbouring countries by setting new heights in excellent service, constantly widening our domain expertise and ensuring customer delight through constant innovation. Read More...