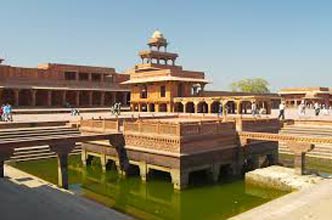 Total 06 hotel nights.
Accommodation in a double room and daily buffet breakfast.
Climb on elephant backs at Amber Fort, Jaipur.
Rickshaw ride through the Jaipur market.
Horse cart ride from the bus stop to the entrance gate to Taj Mahal in Agra (Tonga Ride).
Transfers, visits / excursions according to program
01 passenger in a car air conditioning (A / C Tata Indigo),
02 to 03 passengers in an air conditioning car (A / C Toyota Innova),
04-06 passengers with a macro van of air conditioning (Tempo Traveler).
Local guides speaking Castellana for all visits and excursions according to the itinerary.
Assistance in each city round-trip time.
Spanish telephone assistance 24 hours / 7 days during the tour.
Local taxes applied at this time.
The service tax of 3.50%.Airfare and airport taxes.
The entrances to the monuments.
Personal expenses such as drinks, tips, visas, insurance, laundry as well as telephone calls.
National and International flight tickets, visa.
Any other service that has not been specified as "included".