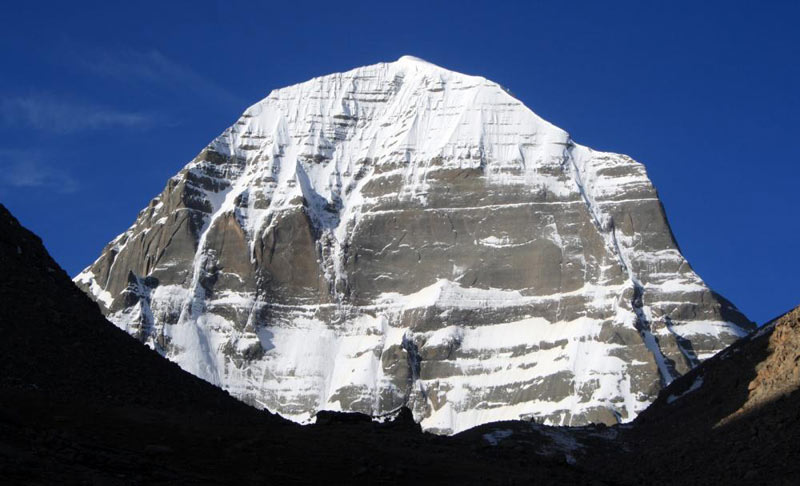 Mt. Kailash (6714m) is the most sacred mountain in Asia. It is believed to be the physical embodiment of the mythical Mt Meru, said to be the center of the universe or 'navel of the world'. Mt. Meru is depicted as a mandala, and its image occurs throughout both Buddhista and Hindu parts of Asia. Mt Kailas is holy to followers of four religions. To Hindus, Kailash is the abode of Shiva and nearby Mansarovar Lake is the means or soul of Brahma. Tibetans call Kailas Kang Rimpoche. Jains worship it as Mt Ashtapada, the peak from which the religion's founder, Rishabanatha, achieved spiritual liberation. Followers of Bon-Po, the ancient pre- Buddhist shamanistic religion of Tibet, revere Kailas as the soul of Tibet. Mt. Kailash has long been an object of worship for four Major religious, for Hindu, it is domain of Shiva, It is also the abode of samvara-a multiarmed, wrathful deity worshipped in the chakrasamvara Tantric cycle of Tibetrian Buddhism. The joins of India also reverse the mountain as the site at which the first of their saints emancipated. And in the ancient Bon religion of Tibet, Kailash was the secred nine storeys Swastika Mountain, upon which the Banpo founder Shenrab alighted from haven. The 53 Km. Kailash circuit is the holist of all-Hindu as well as Buddhist pilgrimages and the beacon, which draws most traveler to western Tibet. It is said that a single Parikarma erases the accumulated sins of a lifetime, while 108 cicurmbulation will achieve Salvation. Lake Mansarovar: At an elevation of 4510m, is more important to Hindus than to Buddhists. Hindu pilgrims make an 85km. circuit around Manasarovar that is made longer and more difficult by marshes and complicated stream crossings. The Tibetans, being more pragmatic, often make a circuit of the lake in the winter when the streams are frozen and the route is shorter. Near Manasarovar is another large lake, Rakshas Tal, the 'Demon Lake' that holds far less spiritual significance. Sprawling below Mount Kailash is the sacred lake Manasarovar (4510m), where ritual bath will deliver a pilgrim to brahm's paradise and drink of its water relinquishes the sins of a hundred lifetimes.Tickets to Kathmandu and return. Nepal visa for NRIs / foreigners. All personal expenses like telephone calls, tips, shopping, laundry, cold/hard drinks etc. Personal call from mobile phones, there will be charge as per the use. Personal use of pony (horse) / porter during Parikarma [Kora]. Single room supplement in Kathmandu. Any extra services such as extra vehicle / hotel nights / sightseeing tours than mentioned in the itinerary. Evacuation cost, Travel Insurance. Extra cost such as extra night stay than mentioned in the itinerary, ill health, cancellation, changes in itinerary that are incurred due to unforeseen reasons such as road blockage due to landslide, heavy snowfall, strikes, flight cancellation etc. Service which are not mentioned above in inclusion part.08-0518-09