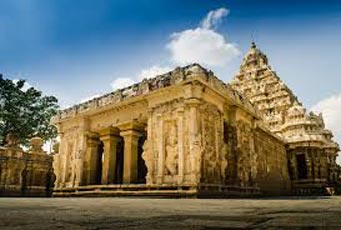 Rameswaram : A small Island and Major Pilgrim Centre is connected to the mainland by Pamban Bridge. On his return from Ceylon after Ravana Yudhdham in Lanka, Sri Rama offered his repentance prayer to Lord Siva to absolve his sins that he had committed by Slaying Ravana. 22 Holy theertham [wells] are in the temple, It is believed that number of wells denotes 22 arrows in Rama’s quiver. The temple has striking long corridors in its interior, running between huge colonnades on platforms above five feet high. Pilgrims visiting Rameswaram cannot miss the darshan of Ramanatha Swamy and bathing in all the 22 theerthams to absolve oneself from all sins. The Ramanathaswamy temple is renowned for its magnificent corridors and massive sculptured pillars. The third corridor of Ramanathaswamy temple is the longest one in the world. Madurai is an energetic, ancient city on the Vaigai River in the Its skyline is dominated by the 14 colorful gopurams (gateway towers) of Meenakshi Amman Temple. Covered in bright carvings of Hindu gods, the Dravidian-style temple is a major pilgrimage site. Places of interest Sri Meenakshi Sundareswar Temple Sri Tirumalai Nayak Palace Thirupparankundram Temple Gandhi Museum Mahabalipuram was the earlier name of Mamallapuram lies on the Coromandel Coast which faces the Bay of Bengal. The beauty of the place is not only due to these architecture but the vast casuarinas trees, the silvery sandy beach the classical hand male crafts around have made them all to form what is a collective splendor. Mamallapuram’s wonders in rock leave visitors enthralled, conveying as they do, an impression of beauty and harmony. The monuments are floodlit at night and so it is possible to enjoy their beauty even after sunset.. Five Rathas :the five structures are named after the Pandava brothers of the Mahabharatha and Draupadi. They are also known as the Pancha Pandava Rathas, and the four of the rathas are supposed to have been scooped out of a single rock formation. Mahishasuramardhini Cave : There are nine rock-cut cave temples. The Mahishasuramardhini cave, contrasting the goddess fighting a demon on one side, and Lord Vishnu’s cosmic sleep on the other, is a particularly remarkable. Krishna Mandapam : This cave has a big bas-relief, notable for its realistic representation. The panel relates one of the stories of Lord Krishna. Arjuna’s Penance : The world’s largest bas-relief measuring 27m x 9m is the pride of Mamallapuram. This huge whale-back shaped rock contains figures of gods, demigods, men, beasts, and birds and in fact, can be said to represent creation itself. The Shore Temple : This is one of the oldest temples in South India. It belongs to the 8th Century A.D. and is a good example of the first phase of the structure of temples constructed in the Dravidian style. Krishna’s Butter Ball : The huge boulder near the Ganesha Ratha is popularly known as Krishna’s butterball. It rests precariously on a narrow rock base. It is believed that several Pallava kings have attempted to move the stone, but legend is that neither the kings nor their elephants could shift the boulder even by an inch. The golden temple complex of Sripuram is a spiritual park situated at the foot of a small range of green hills in a place known as “Malaikodi” in the city of Vellore in Tamil Nadu, India

Surabi Tours & Travels is one of the eminent travel agencies located at Hyderabad laid the foundation stone of the company in the year 2012 by Ms. T S K Himabindu (Owner) , with a motive to fulfill all the travel requirements proficiently. Surabi maintains cordial relationships with all the clients and listen to their travel requirements and analyse their needs and propose complete tour package in a quick phase and handle the tour, hotels, vehicles etc., Surabi offers a wide range of customised tour packages starting from Heritage & culture, wild life safaris, House boat tours, hill station tours, honeymoon tours, family tours , students tour, group tours, corporate tours and also offer flexible services to make last minute changes on your advise to yr tour with competetive prices which are affordable. Be on your tour, in your way, rely on us for complete satisfaction and get wonderful experience of a memorable trip. Read More...