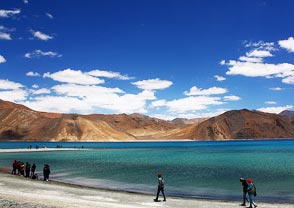 Valleys of Ladakh with Pangong Stay

Airfares trainfare. Any monastery entrance fees, Any Joy ride or rafting. Medical expenses (apart from first aid) and insurance of any kind. Tips, laundry, liquors, wines, mineral water, telephone charges, camera fee and items of personal nature. Transportation is not on disposal basis. It is strictly as per the programme, any extra running will be charges extra. Any expenses arising out of unforeseen circumstances like flight delay / cancellation / hike in fare, strike or any ther natural calamities or any emergency evacuation expenses. Any other item not mentioned in the cost includes section.01-0830-03