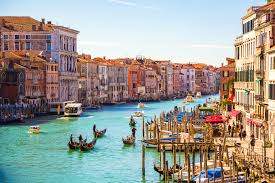 Overview: Our Itinerary Begins with Two Nights in Incomparable Venice, the World’s Most Famous Lagoon. We’ll Explore the Islands of Burano and Torcello and Take a Boat Ride Down the Grand Canal. We’ll Visit Padova and the Scrovegni Chapel On the Way to a Three Night Stay in Romantic Verona with Its First Century Roman Arena. the Villas of Architect Andrea Palladio and His Incredible Teatro Olimpico Follow. a Ferry Ride Across Lake Garda Will Take Us to Riva and Further North to the Dolomite Mountains, Wonderful Bolzano and Austrian Italy. a 17th Century Venetian Noble Palace in Follina is Our Base for Exploring the Prosecco Wine Region. We’ll Discover the Village Charm of Hilltop Asolo and Antonio Canova’s Sculptures At Possagno. all this and More You Will Discover in the Northeast Italian Regions of Veneto and Alto Adige!