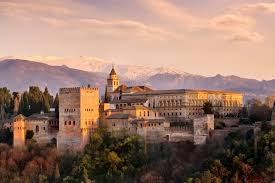 Tour Overview: Andalucia is the Southernmost Region of the Iberian Peninsula. We Begin with the Fabulous 13th Century Alhambra, a Paella Cooking Class and a Night of Flamenco in Granada. Our Journey Continues to the Great Mosque of Córdoba, Through the Extraordinary Landscapes of Ronda and Stop At An Olive Oil Mill for Lunch in the White Villages. A Performance of Dancing Stallions Will Follow At Jerez Where We’ll also Check Out Their Dry Sherry. At Seville We Stroll Through the Palaces of the Alcázar and the Casa De Pilatos and Take a Boat Ride On the Guadalquivir River. a Nearby Bull Farm Visit with Bullfighting Demonstration and Barbecue Accompanied By fine Spanish Wines Highlight Our Last Days On Tour.

perhaps There Never Was a Monument More Characteristic of An Age and People Than the Alhambra; a Rugged Fortress Without, a Voluptuous Palace Within; War Frowning from Its Battlements; Poetry Breathing Throughout the Fairy Architecture of Its Halls.