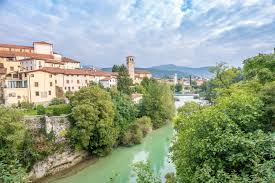 Romans, Lombards, Huns and Austrians Highlight Our Visit to the Northeast Italian Region of Friuli. Four Nights in Grado with Lagoon View Rooms. a Boat Trip to Isola Barbana. Visits to a Small Winery in the Hills of the Collio, the Ancient Roman City of Aquileia, Charming Udine and Magnificent Trieste! in Slovenia We Stay 3 Nights in the Capital Ljubljana, Your Next Favorite City and the Green Capitol of Europe 2016! We’ll Visit Ptuj, the Country’s Oldest Settlement, the Small Villages of Kropa and Škofja Loka and Take a Train Ride Through the Postojna Caves. Stunning Views from Your Lakeview Rooms On Beautiful Lake Bled, a Pletna Boat Ride, An Optional Hike Through Vintgar Gorge and Great Food and Wines Complete Your Three Night Stay in Bled.