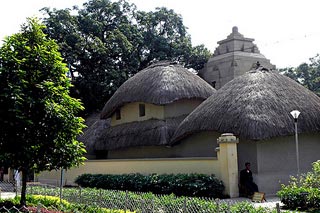 ANTPUR
Antpur is a village in Jangipara community development block of the Sreerampore subdivision in the Hooghly District in the Indian state of West Bengal. It is around 20 km from Tarakeswar, the famous temple town and railhead for the Sheoraphuli–Tarakeswar section.

The most famous temple in Antpur is that of Radhagovindjiu with exquisite terracotta carvings depicting stories from all the 18 puranas. This 100 feet high temple was constructed by Krishna Ram Mitra, the Diwan of Bardhaman Raj in 1786 (1708 Shakabda). Its Chandi Mandap and Dol Mancha have beautifully crafted wood carvings.

The period when the temple was built was curious. Muslim rule was ebbing out and the Europeans were making forays into the country. It is said that Krishna Ram Mitra built the temple to enthuse the Hindus. Terracota work which was earlier an exclusive preserve of Bishnupur artisans was no more so. While Radha and Krishna are predominant in the carvings, there also is the goddess Durga, whose worship had been revived in a big way by Nabakrishna Deb of Shovabazar Rajbari in 1757.

Besides the main temple of Radhagovindjiu are the temples of Gangadhara, Fuleswara, Rameswara, Jaleswara and Baneswara. Antpur was the village home of Baburam Ghosh (later Swami Premananda). It was at Antpur that Swami Vivekananda and eight other disciples of Sri Ramakrishna took their vow of ‘sannyasa’ on 24 December 1886. The Ramakrishna-Premananda Ashram of Antpur has built a temple on the birthplace of Swami Pramananda.

A holy destination for lovers of religion, Tarakeshwar or Tarakeswar is a small village in Hooghly district of the state West Bengal. The picturesque place is an important center of religious significance for Hindus. The renowned Tarakeshwar temple, dedicated to Lord Shiva is located here and draws millions of pilgrims every year to this place.
The city is a perfect tourist destination to visit. Tarakeshwar Travel Guide is full of references to the religious destinations and serene spots. Tarakeshwar Temple, Buddha Temple and Dudhpukur Tank are the popular tourist attractions of the city.

The story goes that two brothers descended to Tarakeshwar from Ayodhya and unearthed a Shiv Lingam in the forest. Sensing some foul play, the local villagers forced one of the two brothers to hold hot iron in his hand. The brother comfortably passed the test seeing which the other brother unearthed the Siva Lingam in the forest. It was later revealed that the brother had a dream in which Lord Shiva instructed him to build the temple there.

West Bengal is considered to be one of the richest states in India in terms of culture, tradition, fairs and festivals. The festivals inTarakeshwar are celebrated with great delight and religious sentiments.

Charak Puja: An exclusive festival of West Bengal, Charak Puja is a festival celebrated for saying good-bye to the passing year. It is considered that the celebration leads to affluence in the coming year. Charak Puja is celebrated on the midnight of Chaitra Sankranti.

Durga Puja: Durga Puja, dedicated to the Goddess Durga is one of the most awaited events in Tarakeshwar city. It occurs twice every year and is celebrated with much pomp and show. This eve symbolizes the triumph of Goddess Durga over the devil Mahishasura. It is a wonderful experience to be a part of these festivities in Tarakeshwar.

Holi: The “festival of colours” is indeed celebrated in a very colourful manner in Tarakeshwar and is one of the biggest festivals for the natives. The atmosphere is really charged up during the celebrations.

Jairambati is now a small town in Bankura district with all the signs of village life very much visible everywhere. Being surrounded by green pastures on all sides the place is in itself an ideal place to enjoy the simplicity of a village life and breathe fresh air free of pollutants.

It is the Matri Mandir in the centre of Jairambati which draws large number of visitors from around the world. Also known as Jairambati Math, the Matri Mandir is in fact a beautiful temple built exactly on the place where the Holy Mother was born. This temple was dedicated to the Ma Sarada by Swami Saradananda on 19th April 1923.

The white marble statue of the Holy Mother was installed in the temple on 8th April 1954, and a spacious Prayer Hall was also added as an extension to this temple. The sacred relies of the Holy Mother have been preserved in the Sanctum. A small-sized Shiva Lingam (the stone emblem of God Shiva) which was found at the time of digging the earth for the construction of this temple is also worshiped here.

Inside the temple premise on the right side of the main gate is Mother’s ancestral house. On the opposite side of this house is a relatively new house where she stayed from 1916 to 1920.

Kamarpukur, renowned world over as the birthplace of the great Indian saint Sri Ramakrishna is frequented by lakhs of visitors from around the world every year. Devotees and followers of Thakur Sri Ramakrishna visits Kamarpukur not only to pay their homage but also to get spiritually refreshed and elevated.

Kamarpukur, synonymous with Sri Ramakrishna is now a small hamlet town in the Hooghly district of West Bengal. It is the place where the great 19th century Indian philosopher Sri Ramakrishna was born in 1836 in a poor Brahmin family. With his advent and on account of the frequent visits of his disciples and devotees, this hamlet has now become a place of pilgrimage.

Apart from being a pilgrimage site for peace loving holy mind in search of spirituality, the natural beauty and calmness of Kamarpukur attract thousands of solitude seeking tourists to this place round the year. This small hamlet town with signs of ancient prosperity still visible everywhere makes your journey to spirituality all the more fascinating. It is the Kamarpukur Ramakrishna Math which has gave Kamarpukur a permanent place in the tourist map of Bengal.

Apart from the Kamarpukur Ramakrishna Math, there are many other attractions in this place including the ancestral home of Sri Ramakrishna, Raghubir Temple, Yogi’s Siva temple, Haldar-Pukur and Manik Raja’s Mango Grove. The temples in this city are really imposing and are places offering secluded worship. Temple of Gopeswar Siva, Dhani Kamarini’s Temple and Mukundapur Siva Temple are some among them.

With the construction of guest houses for accommodation of visitors, a library, a dispensary and school the Math has now became a centre of activity. Re-excavation of the tank called Haldarpukur and with the development of the surroundings, the place has really become one of the beauty-spots in the whole locality.Tax, Porterage, Tips, Entry Fees, Camera Charges15-0730-09