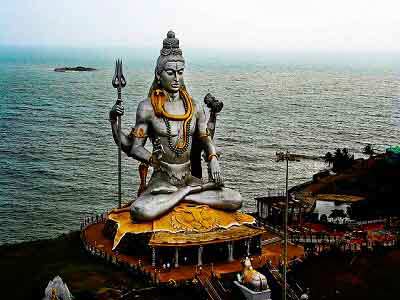 Hassan:
Hassan is situated 934 mts above sea level with fine weather similar to Bangalore. The town was founded in the 11th century, by Channa Krishnappa Naik and was called Hassan after the Goddess "Haasanamba". The place is called the temple-architectural capital of Karnataka. Hassan, the main city dates back to the 11th century, during the Hoysala dynasty, which lasted to the fourteenth century. The earlier kings of town were of the Jain faith, who built some finest temples here, dedicated to Shiva. While the Hoysalas were at the zenith of their power, much of southern India along with this place was under their influence.

Subramanya:
Kukke Subramanya is a Hindu temple located in the village of Subramanya near Mangalore, Karnataka. The temple is one of the pristine pilgrimage locations since Lord Subrahmanya is worshipped here as the lord of all serpents. The epics relate that the divine serpent Vasuki found refuge under Lord Subrahmanya when threatened by Garuda. Pilgrims going to the temple have to cross the Kumaradhara River and take a holy dip in the river before entering the temple.

Mangalore:
Mangalore is the chief port city of Karnataka, located about 350 kilometres west of the state capital, Bangalore. Mangalore lies between the Arabian Sea and the Western Ghat mountain ranges. Mangalore derives its name from the Hindu Goddess Mangaladevi and developed as a port on the Arabian Sea. Lying on the backwaters of Gurupura River, the city is often used as a staging point for sea traffic along the Malabar Coast. Mangalore was ruled by several powers, including the Kadambas.

Udupi:
Udupi is a town in the south-west of Karnataka and is notable for the Krishna Temple, lending its name to the popular Udupi cuisine. Udupi, also known as Rajata Peetha is a centre of pilgrimage, situated about 58 km north of Mangalore. Udupi is known for the Krishna Mutt and also native place of the Vaishnavite saint Shri Madhvacharya. Shri Madhvacharya handed over the puja of Krishna Mutt to his 8 disciples and of them set up their Mathas around the Krishna Mutt. During the Paryaya festival, which is held every two years, the Mutt management is handed over to the next Matha.

Murudeshwara:
Murudeshwara is a town in the Bhatkal Taluk of Uttara Kannada and is named after Murudeshwara, another name of the Hindu god Shiva. Famous for the world's second-tallest Shiva statue, Murudeshwara beach town lies on the coast of the Arabian Sea. The Hindu gods attained immortality and invincibility by worshipping a divine Lingam called the Atma-Linga, here. It is believed that great Lanka King Ravana wanted to attain immortality by obtaining the Atma-Linga and worshipped Shiva with devotion, here.

Gokarna:
Gokarna is a town in the Uttara Kannada of Karnataka, a Hindu pilgrimage centre as well as a popular tourist destination. Gokarna is a temple town, referred to in a number of Hindu historical literature pieces. The main deity is Lord Mahabhaleshwara, a form of lord Shiva. Around Gokarna lie a number of beaches that are major attraction for travelers. It is believed that Lord Shiva emerged from the ear of a cow here as it is also located at the ear-shaped confluence of two rivers, Gangavali and Aghanashini. Gokarna is also specifically mentioned in the Shrimad Bhagavata Purana.

Sringeri:
Sringeri Sharada Peetham is monastery established by Adi Shankara in 8th centiry BC. The matha is on the banks of the Tunga River in Chikmagalur, 105 kilometres from Mangalore, Karnataka. The origin of the matha is described in various traditional sources. Adi Shankara is said to have lived here for twelve out of thirty-two years. Vishwarupa, assuming the name of Suresvaracharya, was installed here as the successor of Shankaracharya.

Horanadu:
Horanadu is holy city for Hindus, located in Chickmagalur district, Karnataka. The deity at the Annapoorneshwari Temple is Annapurneshwari and the main deity of the goddess was put in place by Adi Shankaracharya. Horanadu lies amidst beautiful Malnad at 330 KM from Bengaluru. Every visitor to the Annapoorna temple at Horanadu, irrespective of their religion is provided with a three-course vegetarian meal. The main deity of Annapoorna is made of gold in the temple.Air fare train fare. guide & entry fee during sight seeing. boating horse riding etc. Portages, Laundry, Food, Tips, Liquor,All road taxes, toll taxes, parking fee.Any other item not specified in cost includes.