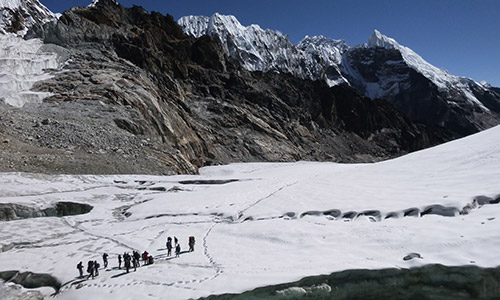 Everest Tyangboche Trek the Everest Region is Understandably the World's Most Popular and Spectacular Hiking Destination. Our Foot Prints of Sir Edmund Hillary Trek Begins with a Spectacular Flight from Kathmandu to the 9,300-foot Airstrip At Lukla. We Then Follow the Traditional Expedition Route to the Sherpa Capital of the Khumbu, the Village of Namche Bazaar and Onwards, Alongside Raging Rivers. Along the Way We Will Visit Many Picturesque Sherpa Villages such as Tengboche, the Home of Nepal's Most Famous Monastery Situated Beneath the Impressive Backdrop of Everest and Ama Dablam (mother's Charm). Sacred Stones, Chortens, Mani Walls (boulders Marked with Buddhist Prayer Inscriptions) and Prayer Flags Will Mark Our Route as We Look Down Into the Gorge of the Dudh Kosi and Gaze Up At the Seemingly Outstretched Arms of Ama Dablam. the Everest Region Has Incredibly Dramatic Mountain Scenery, Crowned By the Presence of the Highest Mountain in the World. the Flight to Lukla is Spectacular and a Trek Up the Dudh Kosi Valley Sees Us Surrounded By the Soaring Peaks of Thamserku and Kusum Kanguru. Namche Bazaar is Capital of the Khumbu Sherpas and the Famous Thyangboche Monastery Appears Almost as An Abode of the Gods, Located as It is Under the Shadows of Everest, Ama Dablam, Kantega and Countless other Snow Peaks.