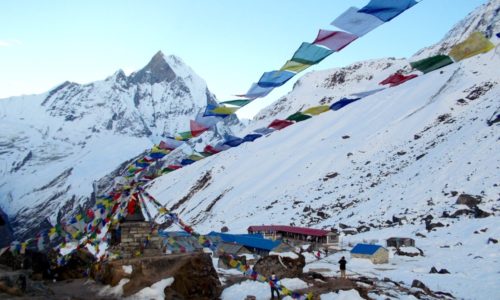 Kathmandu, Pokhara & Annapurna Base Camp the Annapurna Region in Central Nepal is the Most Geographically and Culturally Diverse Region for Trekking. the Area Boasts of a Variety of Diverse Cultures, Tribes and Castes Including the Brahmins, the Chettris, the Newars, the Gurungs, the Magars, Manangis and the Tibetans. this Area Has Sub-tropical Lowlands, Valleys, Forests of Bamboo, Oak and Rhododendron, Alpine Meadows, Windswept Desert Plateaus and the Towering Annapurna Mountains. this Area Has the World's Deepest River Gorge, Kali Gandaki, Lying Some 6900 Metres (22,563 Ft.) that Lies Below Annapurna I , World's Eighth Highest Mountain) and the Fishtail Mountain. the Area is Home to Over 440 Species of Birds and Animals like the Marten, Deer, Langur and the Elusive Snow Leopard.