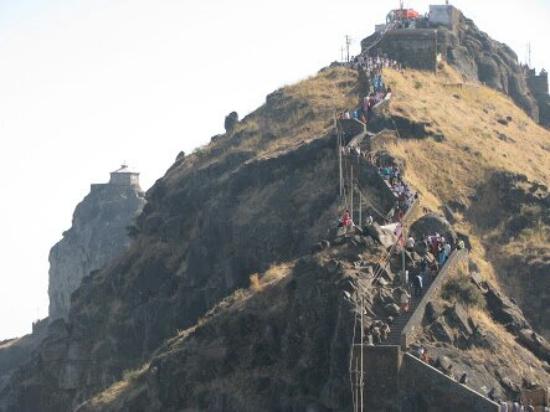 Girnar, Abode of Guru Dattatreya (the Trinity God). eziitours Brings You An Amazing Experience of Girnar Darshan Yatra, 10,000 Steps Up the Hill with a Well Escorted Team. Girnar (also Known as "girnar Hill") is a Collection of Mountains in the Junagadh District of Gujarat, India. the Tallest of These Rises to 945 Meters (3600 Feet), the Highest Peak in Gujarat. of Its Five Peaks, Gorakhnath is the Highest Point in Gujarat. Girnar Darshan Yatra is a Holy Yatra and An Important Pilgrimage for Both Hindus and Jains. there are Several Temples and Beautiful Lakes in the Girnar Region Which You Can Explore During Our Girnar Darshan Yatra. the Last Summit of Girnar Darshan Yatra is Guru Shikhar - Which is the Home Abode of Trinity Lord Guru Dattatreya. It is About 10,000 Steps Climb Which Generally Takes 5-6 Hours. the Steps are Well Built and Till the End. with Our Girnar Darshan Yatra - You Get to Explore Girnar and Nearby Areas. Girnar Darshan Yatra is Equally Important Pilgrimage for Hindus and Jains. At About 4000 Steps There is a Temple of Shri Neminath - the Jain Tirthankar. We At Eziitours have Taken More Than 1200 Bhaviks So Far On this Girnar Darshan Yatra and They have Extremely Enjoyed this Tedious Journey. some Temples At Girnar Present a True Blend of Art, Religion and Devotion Which You Can See During Our Girnar Darshan Yatra. the Sculptural Art Used in These Temples is Outstanding. They have Stood the Test the Time and the Cruelty of Various Invaders. Despite That, the Art Forms of the Temples Still Retain Their Magnificence. at 5,500 Steps Roughly - There is a Temple of Ambaji - Basically a Shaktipeeth Which is Highly Reverred. this is also Something You Will Get to See and Take Darshan of Maa Ambe During Our Girnar Darshan Yatra Tour.Camera Fee (if Any)* personal Shopping Expenses 5% Gst expenses Caused By Factors Beyond Our Control like Rail and Flight Delays, roadblocks, Vehicle Mal-functions, Political Disturbances Etc. Alcoholic / Non- Alcoholic Beverages tips, Laundry & Phone Call any Room Orders in Hotels any Additional Expenditure pooja Prasad Material