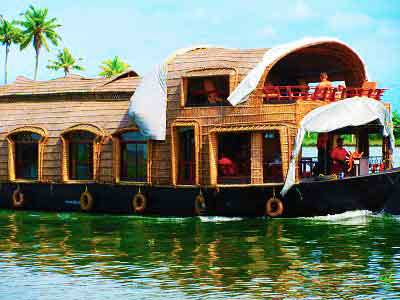 Cochin: Cochin, also known as Kochi is a major port city on the west coast by the Arabian Sea and is part of the district of Ernakulam. Kochi is often called by the name Ernakulam, which refers to the eastern part of the mainland Kochi and the statutory bodies that oversee its development are the Greater Cochin Development Authority. The city of Kochi is the most densely populated city in the Kerala, and is part of an extended metropolitan region. Kochi city is also a part of Greater Cochin. Munnar: Munnar is a hill station on the Western Ghats, a range of mountains situated in the Idukki, Kerala. The name Munnar is believed to mean "three rivers", referring to the town's strategic location at the confluence of the Madhurapuzha and Kundaly rivers. The nearest major railway stations to the place are at Ernakulam and Aluva while the nearest airport is Cochin International Airport, 105 kilometres away. Most of the native flora and fauna of Munnar continue to survive and thrive. Alleppey: Alleppey is the administrative headquarters of Alappuzha District. This town is considered to be the oldest planned town in this region and the lighthouse built on the coast of the town. Alleppey is the sixth largest city in Kerala and is situated 62 kilometres to the south of Kochi and 155 kilometres north of Trivandrum. A town with picturesque canals, backwaters, beaches, and lagoons, is one of the places known as "Venice of the East" by Lord Curzon. Guruvayur: Guruvayur is a beautiful town in Thrissur and houses the famous Guruvayur Sree Krishna Temple, the fourth biggest temple in India in terms of the number of devotees coming to site. Guruvayur, according to the legends may be 5,000 years old as the temple idol. There are no historical records to establish, but in Tamil literature 'Kokasandesam', references about a place called Kuruvayur is made. As early as 16th century, many references are made about Kuruvayur. Thekkady: Thekkady is the location of the Periyar National Park, which is an important tourist attraction for South Indians. Situated in Kerala, close to the Kerala - Tamil Nadu border town - Kumily, it is located about 114 km from Madurai City, 185 km from Cochin International Airport and 114 km from Kottayam railway station. The sanctuary is famous for its dense evergreen, semi-evergreen, moist deciduous forests and savanna grass lands so as the home to herds of elephants, sambar and tigers.Air fare train fare. guide & entry fee during sight seeing. boating horse riding etc. Portages, Laundry, Food, Tips, Liquor,All road taxes, toll taxes, parking fee.Any other item not specified in cost includes.