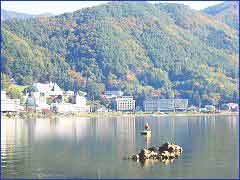 #1
Amont Things to Do in Chubu

Lake Kawaguchi (Kawaguchiko) is the most easily accessible of the Fuji Five Lakes. It is located in Kawaguchiko Town, a hot spring resort named after the lake, and well connected with central Tokyo by trains and direct buses. Kawaguchiko's town center and the hot spring ryokan, some of which have baths with views of Mount Fuji, are clustered around the southeastern shores of Lake Kawaguchi. You can use the baths of some ryokan during daytime and against an admission fee of a few hundred yen even if you are not staying overnight. The touristy hot spring resort also offers an array of museums, including several art galleries and museums on herbs and dolls. Among the local food specialties are Hoto Noodles, a rustic noodle soup dish garnished with vegetables. The western and northern shores of Lake Kawaguchi are less developed. The views of Mount Fuji and the lake are particularly nice from the northern shores and from various observation points on the hills and mountains surrounding the lake. Among the observation points is Mount Tenjo, which can be accessed from central Kawaguchiko by ropeway. Several other observation points can be found along the hiking trails in the mountains north and the hills south of the lake. Last but not least, Kawaguchiko is home to the amusement park Fuji Q High Land, featuring one of the world's tallest roller coasters and other thrilling attractions with Mount Fuji as backdrop.

Top Places to Visit in Chubu

All Places to Visit in Chubu