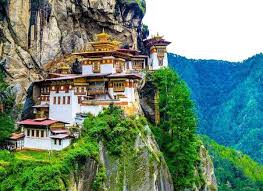 DD Tours and Travel is a known entity, specialized in rendering tour and travel services and solutions to travel enthusiasts. We are based in Bhubaneswar (Odisha, India) and we can be trusted for making travel arrangements. Solutions are provided for Bhutan Tour packages From Bhubaneswar and other destinations all across the nation. We understand that every traveler has unique travel requirements, we thus offer plenty of travel options to fit to the demands of the clients. Working together, we are a group of individuals, dedicated towards delivering the best to the clients. So, for exploring magnificent Bhutan in an effective manner, get in touch with us.

For booking 4 nights and 5 days Amazing Bhutan Holiday Tour packages one can reach us anytime. We design tour packages keeping the varied demands of the travellers in notice. Besides, we process tailored demands suiting the budget and schedule of the clients. Being a responsible entity, we provide complete assistance at every step of your travel to make it more comfortable and memorable for you. So, whenever you plan to jaunt with your folks, let us know to make travel planning for you. Itineraries of the offered tour packages are listed below. For more details, feel free to connect with us anytime.