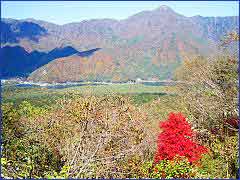 #2
Amont Things to Do in Chubu

Lake Sai (Saiko, lit. "Western Lake"), is smaller and much less developed than neighboring Lake Kawaguchi. It is surrounded by wooded mountains, forests and several camp sites. The views of Mount Fuji from the lake shores is partly blocked by a mountain range south of the lake, but there are beautiful, full views of the volcano from the lake's western shores. A network of pleasant hiking trails covers the mountains and hills surrounding the lake, as well as the Aokigahara Jukai, lit. "Aokigahara tree ocean", an expansive forest south of the lake, famous for people getting lost. Koyodai is an observation point in the hills south of the lake, accessible in an easy 30-40 minute hike from the closest bus station. Several lava caves, formed during past eruptions of Mount Fuji can be found in the vicinity of Lake Sai. Three of them, the Ice Cave, Wind Cave and Bat Cave, have been developed for tourists.

Top Places to Visit in Chubu

All Places to Visit in Chubu